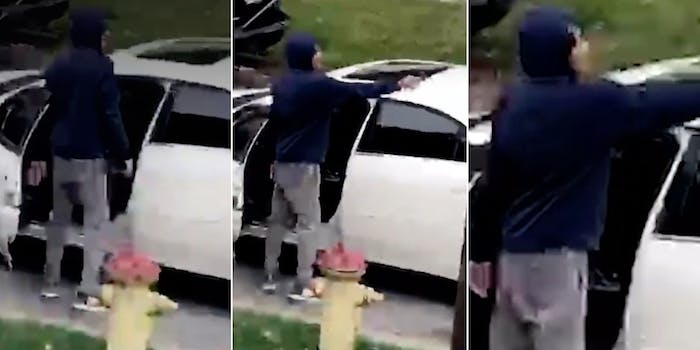 The man opened fire on the kids while they were playing basketball.

A harrowing video shows an Ohio man shooting at several kids playing basketball on the street after they yelled at him to drive slower.

Police in Akron, Ohio, say 15-year-old Markeise Smith was playing basketball with several of his neighbors, including an 11-year-old boy, Fox 8 reports. While the kids were playing, a man in a white Pontiac G6 with tinted windows and temporary tags raced past them.

Smith allegedly yelled for the driver to slow down. The driver then stopped a few houses away, got out of the car, and fired three shots at Smith and the other kids.

When the man began shooting, Smith says he ran after his 11-year-old neighbor and told him to go into the house. Smith then ran into his backyard and told his mom to come to the back door.

A neighbor recorded the gunfire and sent the footage to Fox 8 and local authorities. The video was uploaded to the r/PublicFreakout subreddit on Thursday, where it has since received more than 10,000 upvotes.

“How the fuck do you lose an argument to a small child and then decide murder is the next best course of action?!” the top comment reads. “‘Welp, I’m wrong, better escalate the shit out of this.'”

Akron police say none of the boys were injured, and they are still searching for the gunman.