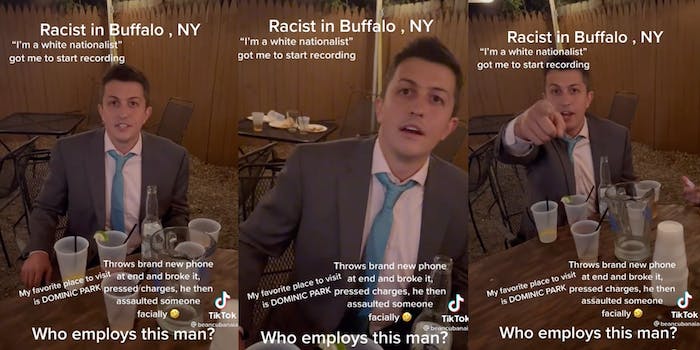 'He just bragged to all of us that he's a white supremacist.'

The last few years have seen hundreds of people face consequences for spouting racist rhetoric, particularly when their xenophobia is captured on camera. Despite the lost jobs, tarnished reputations, and ruined relationships, a new racist is exposed seemingly every day.

A video captured and shared to TikTok by user @beancubanaia shows a man who seemingly goes by Dominic and some companions at what appears to be a wedding. The full video has been removed by TikTok for “bullying,” according to the creator, but a longer version cropped up on Reddit in the hours after it disappeared from TikTok. Between the two uploads, the video has earned tens of thousands of views and a similar number of likes and upvotes, not to mention dozens of comments from appalled users.

The full version of the video lacks the somewhat distracting voiceover, allowing Dominic’s racist rhetoric to be heard.

The Reddit version of the clip, which clocks in at just under two and a half minutes, begins as Dominic demands that his companions “prove me wrong,” though the context for this order is unclear until one of the people at the table clarifies that Dominic asked them to prove him wrong “that white people are better than Black people.”

Dominic then proclaims that he is “waiting” for someone to prove him wrong, as the other people at the table express shock and dismay at his sentiment. The cameraman can be heard inquiring after his name, which one of the people at the table clarifies is “Dominic.”

One of the people at the table blatantly asks him “Do you think white people are better than Black people?” and Dominic responds with a resounding “yes.”

He then demands again that the people around him “prove me wrong.” The person behind the camera is having none of it, however, and demands that Dominic provide backing for his own argument.

“Give us an example, actually, of how whites are better than Blacks,” he says. Dominic responds that “all of civilization was created by white people.” The cameraman notes the absurdity of this assertion before asking Dominic if “there’s white people in Egypt and Africa and all that?”

The men then take a moment to exchange some barbs, as Dominic calls the cameraman the r-word, and he responds that “it sucks you exist.” The cameraman proceeds to go off on Dominic, calling him a “shitty person” and a “bottom of the barrel scumbag.” When people around them inquire after the argument, Dominic proudly proclaims that he is racist, and repeats his claim that white people are superior.

When it becomes clear that the room has turned against him, Dominic becomes far more defensive. He proclaims everyone who disagrees with him “feds,” before rising to embrace a woman who may be the bride. The video concludes moments later after the cameraman asks the woman “How are you this guy’s friend?” and Dominic attempts to slap the phone out of his hand.

Commenters wasted no time in dragging Dominic for everything from his “trust fund” attitude to his demands that everyone else prove him wrong. On TikTok, viewers wasted no time in attempting to identify the man. Numerous commenters boosted the post and tagged powerhouse users like @Danesh to help track him down.

Danesh got ahold of the video and shared it to his own page, where it racked up more than 85,000 views in less than 12 hours. Danesh notes, in his version of the video, that the original poster’s assertion that Dominic was primed to lose his job led him to delete “everything. His social medias, his Linkedin, everything.”

On Twitter, someone claiming to be Dominic, @DominicP669911, said he is “facing an industry blacklist and potentially a divorce” and that “a large amount of friend group is dissociating with me.”

“I understand all of this and accept this as consequence,” the Twitter user wrote.

Danesh said he has “personally confirmed” the Twitter user is Dominic. “I rarely see this type of self reflection in what I do so for what it is worth, Id like to share this with all of you,” Danesh wrote of the tweet.

Danesh told the Daily Dot he got ahold of Dominic and is going to make a video with him soon. “Accountability is rare and consequences can be very sobering. While I believe he took accountability properly, I’m not naive,” he said. “I want to see Dominic make real change.”

He added that he could not have figured out Dominic’s alleged identity without the help of fellow popular TikToker @Rx0rcist.