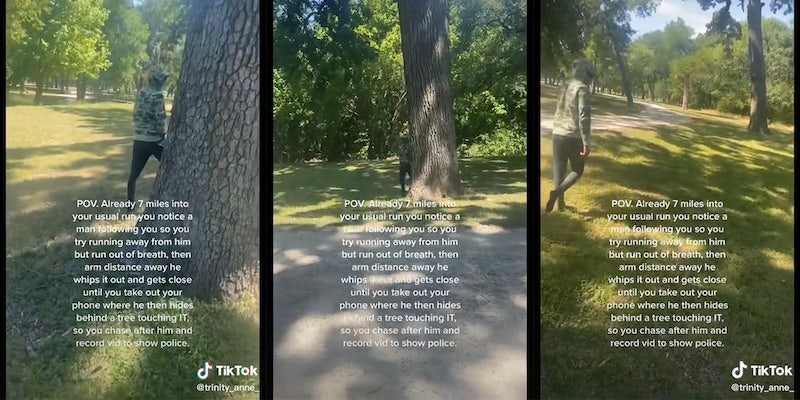 Trinity Hannaway (@trinity_anne_ ) posted a TikTok showing the man whom she says followed her hiding behind a tree on Tuesday. The video shows the man running away from her; she runs after him and is heard crying.

“Spreading [awareness],” @trinity_anne_ wrote in her TikTok’s caption. “Girls. YOU are in control. Not them.”

On Thursday, her video had almost 5 million views.

Other vid got banned. Spreading awarenes. Girls. YOU are in control. Not them.

Commenters on Hannaway’s video expressed support and said that what she experienced must have been “traumatizing.”

“I just want to give you a hug—as someone with a little sister, your crying broke my heart,” @malfuctions wrote.

“I am so sorry this happened to you,” @sophie.valle commented. “We all really need to learn how to protect ourselves in situations like this. Its getting scary out here.”

Others commented that the man might have been following her other times she ran on the trail.

Hannaway posted a follow-up TikTok thanking commenters for their support. In response to a commenter who said that her viral video was staged, she posted a TikTok with a photo of police officers who were on the scene following the incident.

“This is very much real. It is not uncommon for these things to happen nowadays,” Hannaway commented on her video of police officers. “Believe me or not. This is mine and others reality.”

On Wednesday, Hannaway posted a video of herself driving to the trail with pepper spray, she says, for healing purposes. She also revealed that she was running on Trinity Trail in Fort Worth, Texas.

“I was terrified. I was petrified,” Hannaway says in her most recent TikTok. “You’ve gotta always have a weapon.”

She also commented on the video saying that she will never run on the trail again.

The Daily Dot has reached out to Hannaway via email and to the Fort Worth Police Department through a contact form.