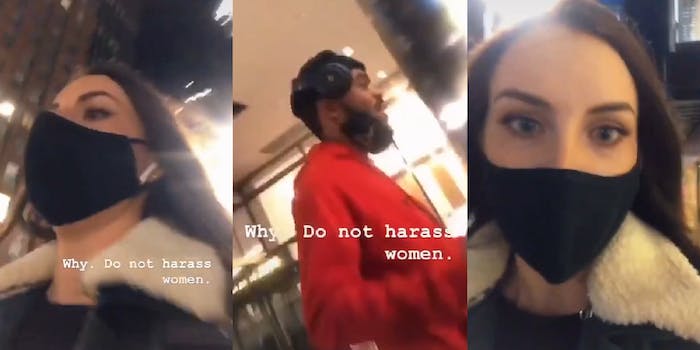 ‘I don’t want to talk to you anymore’: TikToker records man harassing her as she repeatedly asks him to stop

The man followed her for several blocks after she got off the subway.

A woman shared a viral TikTok of a man following her on the street and asking for her phone number as she repeatedly rejected his advances, serving as a potent reminder of the harassment women face on a regular basis.

The video, uploaded yesterday by @allycat_vanroosen, has already earned 1 million views and thousands of supportive comments. It begins with @allycat_vanroosen walking on the street after getting off the subway. She’s filming herself as she tries to end a conversation with the man who’s harassing her.

The clip opens with the man mid-sentence, asking what it is “about you Caucasian women that makes all of y’all so attractive.” (The man is Black.)

“I’m not sure. I just know that you approached me on the subway, and I don’t really need that right now,” @allycat_vanroosen replies.

“I appreciate that, but I don’t want to speak right now,” @allycat_vanroosen tells him. “I’m trying to be as polite as possible, but I don’t really need a chaperone.”

The man still refuses to take the hint and asks @allycat_vanroosen for her phone number. She declines, several times, but he continues to press her about it, saying he “feel[s] like we got a lot in common.”

“I don’t think so,” @allycat_vanroosen says. “I don’t want to talk to you anymore.”

With this, @allycat_vanroosen leaves the man on the sidewalk and continues walking. “Please don’t look at my ass when I’m walking away,” she says. “I really don’t need you to do that.”

The man makes one last Hail Mary attempt to win @allycat_vanroosen’s affection, asking, “Yo, can I get your Instagram?”

@allycat_vanroosen turns him down one last time and keeps walking. “I really don’t like being harassed,” she tells the camera. “This is not OK. And he’s screaming at me.”

Viewers condemned the man’s behavior and expressed support for @allycat_vanroosen in the comments.

“My heart was racing watching this,” @cassie_wil wrote. “So sorry you had to deal with that.”

“That’s why we aren’t polite to men who hit on us,” @anabeatrizaro wrote.

@allycat_vanroosen assures viewers she is OK in a follow-up video and sheds some more light on the harrowing situation. She says the man dogged her for several blocks before she began filming.

“He said, ‘Where are you going?’ And I had to make up a boyfriend,” she says. “I was like, ‘I’m going to my boyfriend’s place.’ I don’t have a boyfriend, but the fact that I had to make that up really sucks just to get somebody to leave me alone.”

@allycat_vanroosen also asked viewers for suggestions on ways to protect herself from unwanted advances. Recommendations included a portable lock for her apartment door, taser, pocket knife, and lighter and travel-size hairspray.