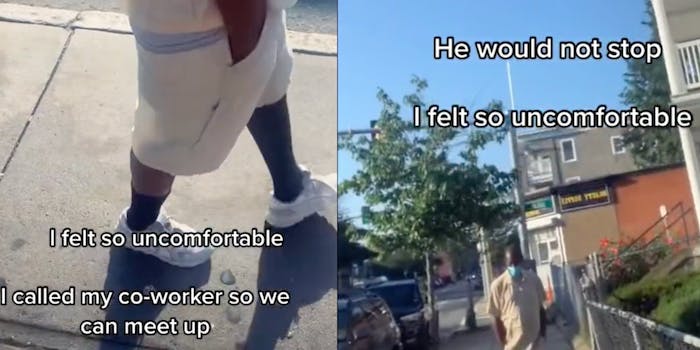 ‘This is why I can’t go anywhere alone’: Woman catches man following her on her way to work in viral TikTok (updated)

'These guys really have no shame. Glad you’re okay.'

One woman on TikTok documented her unsettling experience with a man who followed her while she walked to work.

Bri, or @lovebri20 on TikTok, posted a video of the encounter that has since amassed over 300,000 views. In it, she can be seen walking while a voiceover describes the context of the video. Bri said the man would not stop following her, so she called two of her co-workers and asked to meet them. Bri and her co-workers then went to Dunkin’ together, hoping that the man would leave them alone.

However, he came into the store with them and waited until they received their orders. The man continued to follow the group to one of the co-workers’ cars where he then tried to get in with them. He couldn’t get in, and Bri said he started to bang on the glass before the group drove away.

“I’m glad my car automatically locks because I would be fucking him up,” Bri’s co-worker said in the background.

Bri’s video garnered a lot of comments from people expressing their support for her and acknowledging the dangers women face on the street daily.

“This is why I can’t go anywhere alone I’m [too] scared of men,” one person wrote.

“Omg in broad daylight too,” another said. “These guys really have no shame. Glad you’re okay.”

Unfortunately, there were a number of victim-blaming reactions under Bri’s video as well, criticizing her for not calling the police and for recording the situation. However, others came to Bri’s defense, pointing out that the police would not have been able to get to Bri in time and praising her for capturing evidence of the man’s actions.

“Police have been called in this situation and literally tell us ‘we can’t do anything until something happens’ the police aren’t super heroes,” one woman wrote.

“The police can’t do anything in these situations,” another commenter said. “If the man didn’t physically harm her they can’t accuse him of something he didn’t do.”

Bri clarified that she called her co-workers because she knew they were close by, and it would have taken longer for the police to arrive. She wanted someone to accompany her as quickly as possible.

“It’s really sick because anything could have happened to me today and you guys are saying negative stuff and I just do not understand it,” Bri said in response to the criticism.

In another video, Bri said that she posted the original TikTok to spread awareness and encourage women to be cautious when walking alone.

It’s unclear what happened to the man who was following her, but luckily, Bri appears safe.

Update 4:09 pm CT Aug. 8: In a statement to the Daily Dot, Bri said that she is doing well after the incident. She didn’t expect anything like that to happen to her during her “set routine.” Bri had never seen the man before and she said he never spoke to her while following her.

“He did approach me but didn’t say anything, he stood next to me [stopped] when I stopped and just followed me,” she told the Daily Dot.