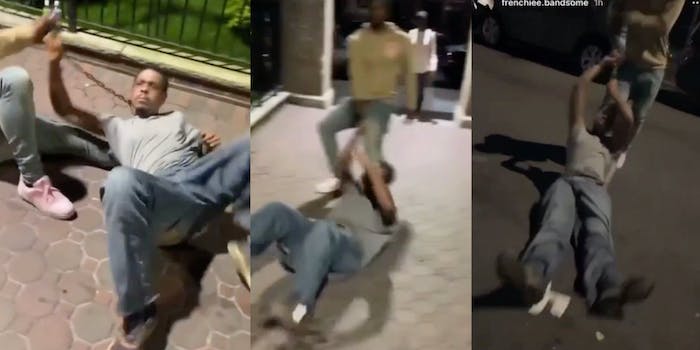 ‘You like dragging dogs?’ Bystander drags man by leash after seeing him allegedly drag dog the same way

The dog’s face appears bloodied and scraped in the clip.

An apparent vigilante dragged a man around by a leash as punishment for allegedly abusing a dog in the same way.

While none of the alleged animal abuse occurs on camera, the pit bull’s face appears bloodied and scraped in the video—which features various clips from an Instagram Story stitched together—and a portion of it is captioned: “[N-word] wanna be abusing dogs.”

The video, which was reposted to Reddit, where it went viral, was tagged as NSFW content, presumably due to the state the pit bull was in. The video was initially posted by the Instagram account frenchiee.bandsome and shows a man dragging around another man who has a metal chain around his neck. The incident allegedly occurred in New York, according to the Sun. The Daily Dot has reached out to both the New York Police Department and frenchie.bandsome.

It’s unclear who owns the dog, though many viewers are speculating the man accused of animal abuse is also the dog’s owner. The man who dragged him around via a leash also slaps his face and kicks him in the torso at various points in the video. The man attempts to fight back, to no avail, and several bystanders can be heard shouting in support of the apparent vigilante.

Bystanders can be heard accusing the man of doing the same thing to the dog that is being done to him. In another clip featured in the video, one can be heard asking the man, “You like f*cking dragging dogs?”

The final clips featured in the video show the dog being petted while inside a house. The video reveals his name is “Prada” and notes that he’s in “good” condition and is soon going to the vet. The person currently taking care of Prada says they are going to buy a new leash for the pooch—a leash that’s “not choking his neck.”