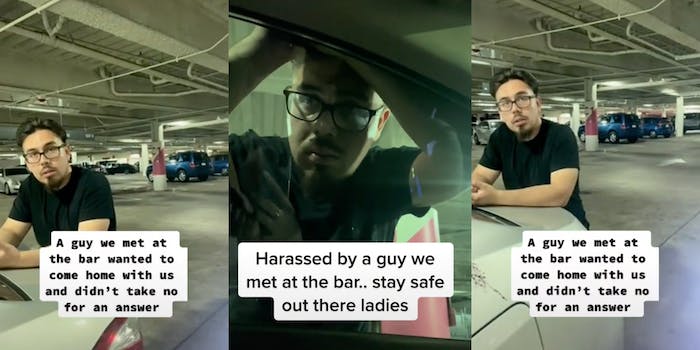 ‘We were trapped’: Drunk man demands to go home with women he met at the bar, blocks their car from leaving

'Sometimes simple kindness to a stranger can turn into weird situations.'

Footage of two women allegedly being followed and harassed by a man they met at the bar has gone viral after being shared on TikTok this week.

One of the videos, which has been viewed more than 2.4 million times, shows an unidentified man staring at the women outside of their vehicle as they speak on the phone with a police dispatcher.

“Harassed by a guy we met at the bar.. stay safe out there ladies,” TikTok user Annie Sully wrote on the video’s overlay text.

Another video detailing what led up to the moment shows the man leaning on the back of Sully’s vehicle as she and her sister, who had met the man earlier at a nearby bar, attempted to leave the scene.

The seemingly intoxicated man repeatedly asks the women to let him come home with them while admitting to recently being in jail after being accused of domestic violence by his girlfriend.

“The way he’s just staring at you guys so calmly.. seriously traumatizing,” one commenter said.

Although the women ordered an Uber for the man, the alleged harassment continued.

“A guy we met at the bar wanted to come home with us and didn’t take no for an answer,” Sully wrote in the overlay text.

In a third video providing further details on the incident, Sully explains how the man initially approached her and her sister at the bar and asked them to take his photograph. The man then proceeded to ask if he could sit with the women before ordering them drinks.

Sully says she decided to call a friend to ask for advice and was told to call the police. While parking her vehicle to make the call, Sully says she noted that her doors automatically unlocked after putting the car in park, leading the man to open the door. The woman says she immediately pulled the door shut with all of her strength, fearing what the man could do if allowed to enter the vehicle.

The TikToker says the police eventually arrived and arrested the man, although the purported charges are unclear.

Sully noted that she and her sister were merely trying to be friendly to what they saw as a lonely man, but argued that she would approach potential future situations much differently after the encounter.

“I think you handled this the best way you could’ve,” one commenter wrote. “Sometimes simple kindness to a stranger can turn into weird situations. Glad y’all are both safe.”

The Daily Dot reached out to Sully to inquire about the incident but did not receive a reply by press time.