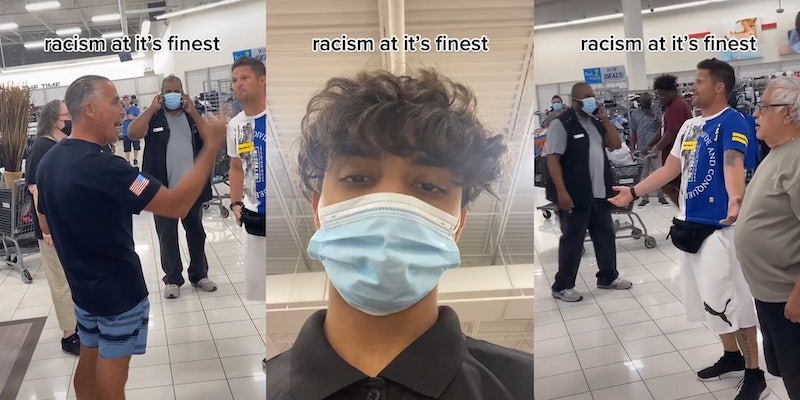 ‘It’s the thought that counts’: Man tries to stand up for Asian man against racist at Burlington, unintentionally ends up also being racist

A viral TikTok video shows a man trying to defend an Asian man from a man being racist at Burlington Coat Factory in Michigan, but he accidentally ends up also being racist.

The video was posted to TikTok by @anasiniesta_08, with a caption that reads: “bro I’m jus tryna work wallah #getyourmoneyup #racistguymessesupwork.” The video has 2.4 million views and starts during a verbal altercation between a white man and an Asian man.

“Go back where you came from,” says the white man.

“I’m from China, you asshole,” the Asian man responds.

It isn’t clear how the altercation started.

Another white man steps up, attempting to defend the Asian man. “I’m as white as you, but I don’t talk shit,” he says.

He holds his arms out and continues, “You’re browner than me, holy shit.”

Many viewers pointed out that while the man’s intentions may have been good, he was also unintentionally racist, as he said in a negative connotation, “You’re browner than me.” “Man said brown like it was the force of evil,” one said.

The jokes also came rolling in. “White on white crime,” one said. “My respect for my light white people,” another joked.

“Are they having a white-off?” a third questioned.

Nevertheless, people respected the man for trying to stand up for the Asian man.

“It’s the thought that counts,” one said.

The Daily Dot reached out to the TikToker for further comment.