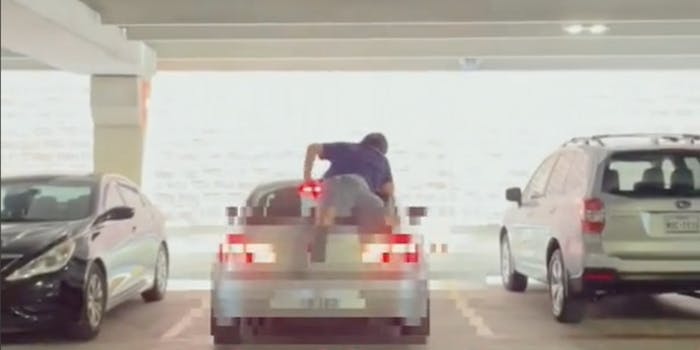 ‘I’ve got you on camera, buddy!’: TikToker saves woman from man attacking, climbing onto her car

'He forcefully kept her from getting in the car then grabbed a rock to break her window.'

A TikTok has surfaced showing a social media coach stopping a man who was allegedly attacking a woman and climbing on the back of her car.

The coach, who goes by Dre on social media, uploaded the video on Sunday, where the man, whose face she blurred out with an emoji, is seen banging on the back of a car.

The man appears to be responding to Dre but it’s not clear what he said. The video then cuts to a scene of the man climbing on the back of the woman’s car.

“He forcefully kept her from getting in the car then grabbed a rock to break her window when she got inside,” read the text in a part of the video.

As he climbs on the back of the car, Dre gets out of her own car and starts walking towards him. The camera becomes blurry and shaky as she walks.

“If you do not get off her car right this fucking second, I am going to call the cops on you,” she says to him.

The video ends shortly after that, but text overlay stated the cops eventually arrived and “handled the rest.”

It’s unclear where the incident took place. When contacted by the Daily Dot, Dre declined to share further details on the issue citing the safety of the woman in the video.

In a follow-up video, she said that the woman did not speak a lot of English. Dre added that her original video ended because she called 911. She also said that the woman was safely taken out of the situation, while Dre continued to confront the attacker. Another couple joined and supported her in her confrontation.

Dre’s video has received more than 2 million views and thousands of comments. Followers applauded her for her bravery in the situation. In a text overlay written on the video, Dre shared that she was scared when walking up to the man on the car.

“Yes it was a risk, IT ALWAYS IS, but as a woman, I would have been soo thankful for you sis,” wrote one user.

“Most abusers are only aggressive towards their victims so she was probs fine to approach but still better safe than sorry to just film and call police,” wrote another user.

“Definitely a risk you have to decide whether or not is the right fit at the right time but in this case I didn’t feel too afraid of him,” Dre responded.