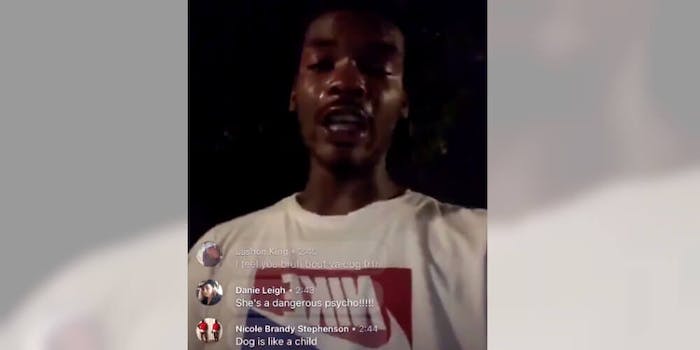 'She put antifreeze in the dog's bowl & he won't tell anyone her name.'

This story contains graphic video footage and descriptions of animal abuse and death.

A man claims his ex-girlfriend killed his dog because he broke up with her. In a graphic Facebook video, the man live streamed his emotional reaction after finding his dead dog.

Twitter user @TaylaxRene shared a screen recording of the video. It has since been shared thousands of times.

“Shot and killed my dog, man. This shit hurt me,” the man says in the video while crying.

The man says he had just gotten home from the club when he found his dog lying dead on the ground. In the video, the man shows his dog with what looks like foam around its mouth.

“She put antifreeze in the dog’s bowl & he won’t tell anyone her name he already said he’s not that kind of guy & he’s going to just let God handle her,” @TaylaxRene wrote in a second tweet.

Twitter users are enraged at the ex for allegedly poisoning the dog. “She a serial killer as far as I’m concerned smh,” Twitter user @SachaRaeRae wrote. Most people said they wouldn’t have been as calm as the man in the video.

She a serial killer as far as I’m concerned smh

I hope she get locked tf up this is sick

But most people are simply heartbroken over the alleged animal cruelty.

“How could someone just poison a puppy or a dog in general. All this over a guy.. makes me sick to my stomach,” one person wrote.

How could someone just poison a puppy or a dog in general. All this over a guy.. makes me sick to my stomach.

Several people claim to know the ex-girlfriend’s Twitter and Instagram handle, but all of the accounts under the purported handle have since been taken down.

The Daily Dot has reached out to several of the concerned parties.