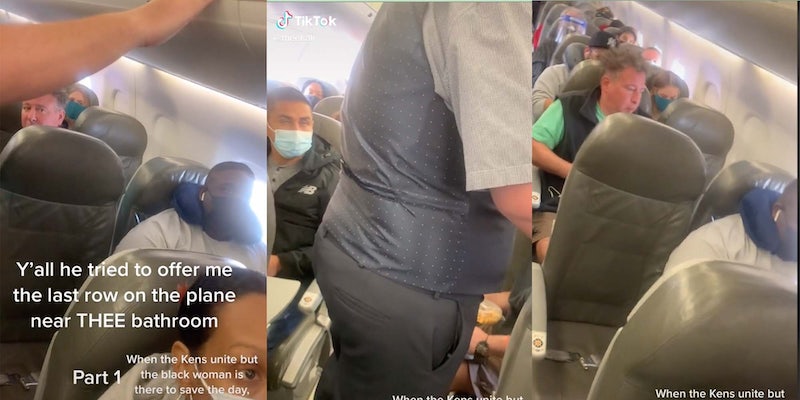 ‘When the Kens unite’: Man blocks Black woman from her seat on flight—white flight attendant tries to move her to back of plane

Once a Black female flight attendant intervenes, the male passenger gets up from his seat.

A white male flight attendant was filmed attempting to move a Black woman to the back of the plane after a white man refused to get up from his seat to let her into her seat.

In the TikTok video, which was posted on Oct. 14 by Kali Ranting (@theekali), the flight attendant also asks Ranting for her boarding pass. However, once a Black female flight attendant intervenes, the male passenger gets up from his seat.

Ranting used the hashtag #JetBlue in her caption, implying that the incident occurred on a Jet Blue flight.

Ranting called out the “aucastity” of both the white men shown in the video in the caption. “When the Kens unite but the Black woman is there to save the day, again!” Ranting wrote in the video’s overlay text.

In a follow-up video, the female flight attendant checks the male passenger’s boarding pass, and the man is seen moving from his seat.

“He should have been removed and that male flight attendant needs to be fired,” @mommakimluvsu commented. “She paid for a seat and he should have asked for his boarding pass.”

“I love how she diverted the male flight attendant away so she could resolve the problem,” @sjwknowsnada commented. “She knows his nature.”

“She removed the useless one, showed everyone who was in charge and handed it,” @mayahassomethingtosay wrote.

“Black women are always backing us up and fighting for us,” @michiamocin commented.

The Daily Dot has reached out to Jet Blue and Ranting.