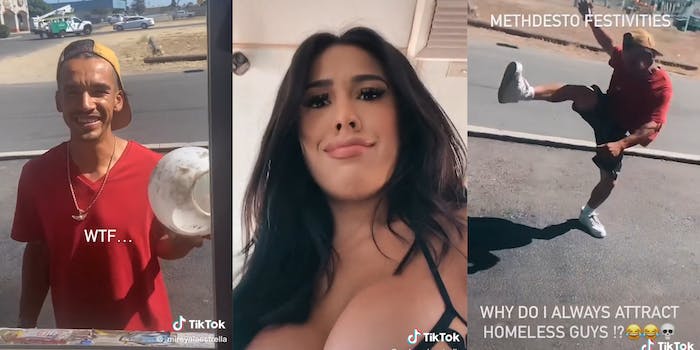 ‘Can we measure them, or what?’: Bikini barista films man asking to measure her breasts

'I know everyone’s like oh he’s so funny I would have tazed him.'

A coffee shop worker recorded a man coming up to the drive-thru window of her place of employment and asking to measure her breasts.

In the video, the man walks up to the window with what appears to be a bowl and mentions her “titties.” “Can we measure them, or what?” he asks.

He consistently tries to hit on Mireya, who doesn’t seem interested. He then proceeds to ask if he can get her number. She said declines but does give him her name.

Mireya put a couple of captions in the video that read, “Methdesto activities” and “Why do I always attract the homeless guys!?”

Further into the conversation, the man continues to try to flirt by showing her some of his Jiu-Jitsu moves, and she has to discourage him from attempting a backflip. He departs by saying that he loves her.

It seems that this individual is known around those parts, with someone commenting on the video saying, “No, I work in a taco truck and he’s gone. It was so funny.”

While the majority of commenters similarly thought the interaction was funny, a few pointed to his opening line. “Why is nobody talking about what he first opened with … the audacity,” one said.

“I know everyone’s like oh he’s so funny I would have tazed him,” another responded.

Another defended the way Mireya carried a conversation with the man. “This is how i talk to men so they don’t assault me LMFAOOO,” they said.

Mireya’s video was viewed 3.7 million times in a matter of days.

The Daily Dot reached out to Mireya via TikTok comment.