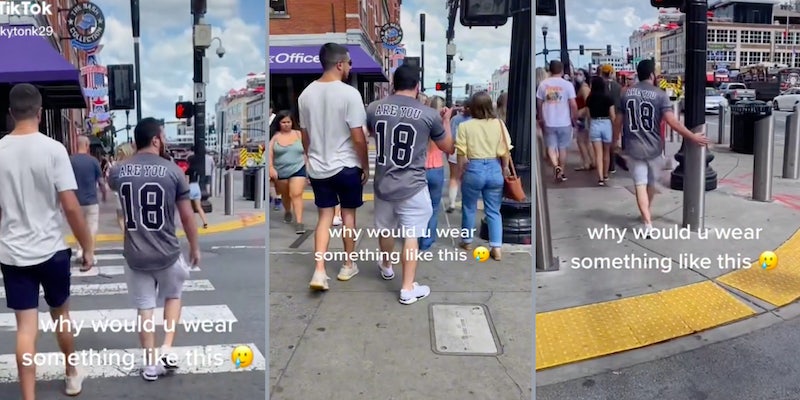 ‘Why would you wear something like this?’: Man flamed for ‘Are You 18?’ shirt on TikTok

'It's a little creepy to me'

A TikToker filmed a man wearing a jersey with the words “Are You 18?” emblazoned on the back, leading to a relentless roasting.

The man and a friend are recorded crossing a street as the TikToker walks behind them. It includes text that reads, “Why would you wear something like this?” Since the video was posted on Sunday, it’s received over 234,000 views and over 41,000 likes.

The video also garnered over 900 comments from people expressing their discomfort with the jersey. “He looks 35, he needs a hobby,” one person wrote. Another person wrote, “It’s a male species thing.”

One person attempted to defend the jersey saying, “There’s nothing wrong with the shirt. He’s just making sure anyone he hits on is 18+. It is kinda weird but it’s good that he doesn’t like minors.”

The creator of the video replied to this comment and wrote back, “If he has to wear a shirt like that because the women he’s hitting on could pass as minors, it’s a little creepy to me, and the claim that he likes little girls still applies.”

There were some comments that thought the jersey was “funny.” It’s unclear who the TikToker was filming and where it was filmed.