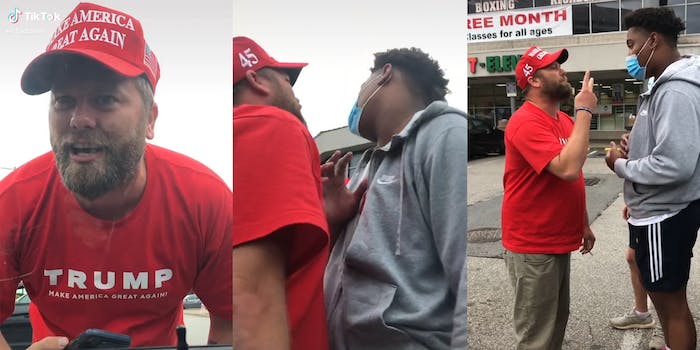 You would think that by late October in the year of our Lord 2020, MAGA chuds would know better than to throw temper tantrums around teenagers with cell phones. But alas, a group of young people captured a man decked out in Trump apparel going full Karen on them in the middle of a parking lot. Whether this man has a public humiliation fetish or truly just lacks one iota of common sense is anyone’s guess, but it makes for great cringe comedy all the same.

TikToker @rfadaeee captured the male MAGA Karen meltdown in two separate videos, which have cumulatively earned about 650,000 views since she uploaded them yesterday. The videos show a man named Richard Potcner, a self-proclaimed “citizen journalist,” pressing his face against the passenger side window of the car in which @rfadaeee and her friends are sitting, his matching MAGA shirt and hat on full display.

Potcner is arguing with the young people about the validity of COVID-19, claiming that hospitals are empty. (Hospitals are not empty, nor is COVID-19 a hoax.) When one of @rfadaeee’s friends standing outside asks Potcner to go back to his car, Potcner melts down.

“Who do you think you’re talking to? Back the fuck up!” Potcner shouts as he invades the man’s personal space. (It’s noteworthy, but hardly surprising, that the young people are wearing face masks, while Potcner is not.) He continues his tirade as @rfadaeee gets out of the car to continue filming.

“Motherfucker, you ain’t got nothing on me,” Potcner continues. “Nothing. Zero. That’s right. Don’t tell me what to do.”

The teens keep their composure as Potcner continues harassing them and takes a drag of his cigarette while still standing in their personal bubble. One of them points Potcner back to his car, but he rejects the suggestion.

“Why would I take orders from your dumb ass?” Potcner asks. “I’ll peacefully do whatever I want to do. I’m not gonna loot, I’m not gonna burn, I’m not gonna murder. But here’s what I’m gonna tell you while you’re wearing your mask: Hospitals are empty. I’ve been through them.”

When the young people suggest that COVID-19 patients wouldn’t be found hanging out in hospital lobbies, Potcner continues, “I’ve been through the whole hospitals. Check my feed, girl. I’ve got 2 million followers. You don’t have any followers. The bullshit you’re gonna post, 10 people are gonna see it. When I post, 2 million see it.”

Unfortunately for Potcner, his prediction was way wrong—and he grossly exaggerated his own following. Poctner has a little over 17,000 followers on Twitter and 10,000 followers on TikTok, where he routinely films himself walking through hospitals and captions his videos #wherearethesickpeople.

Some of Poctner’s older videos received between 10,000 and 50,000 views, and he received 1.4 million views on a video in which he unwittingly seems to be the butt of a hospital staff’s joke. But his recent posts have only been viewed about 1,000 times on average. That’s a far cry from the 2 million followers Poctner touted, and proof that his shtick has grown tired.

This isn’t the first time Potcner has made an ass of himself for all of social media to see. Back in August, when one of his hospital-roaming videos was shared on Twitter, user @KiddCann wrote that Potcner lives in Maryland, where he “owns a landscaping company and constantly gets arrested for violating restraining orders.” Indeed, Potcner’s Twitter bio says he’s based in Maryland, and the Baltimore Sun reported that a Richard Potcner was arrested in Carroll County, Maryland, for violating a protective order on Oct. 18. Maryland’s Mount Airy Police Department also arrested Potcner on May 4 for another protective order violation.

Potcner apparently considers himself to be above the law, given his repeated arrests. But perhaps a group of TikTokers can accomplish what the police could not and convince the newly viral Potcner to stop harassing people in public.