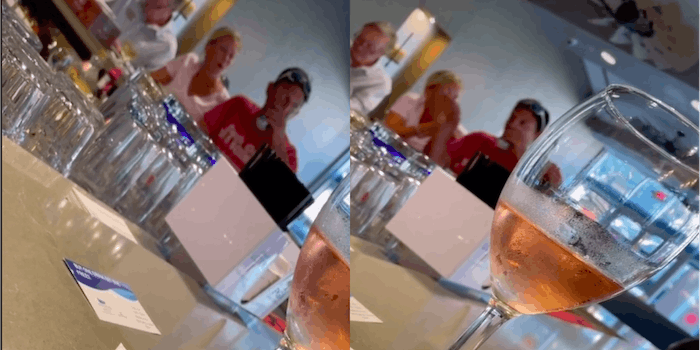 ‘Honey, you relax’: Male Karen has absolute meltdown at bar over vaccines, wife tries to get him to ‘shut up’

A viral TikTok video captured a male Karen going on a long, rage-filled rant about vaccines while sitting at a bar.

The creator who recorded the video from across the bar, @thisoldclintonvillehouse, posted it on Sept 2. It has since amassed over 153,000 views.

The video starts with the man getting increasingly angry about getting a COVID-19 vaccine. “It’s fucking disgusting,” the man could be heard saying as his wife tries to get him to calm down. “No one else is talking, exactly. It’s bullshit, and everyone knows it.”

The man goes on to claim that the vaccine is “maiming and killing people,” which is exactly the opposite of what’s happening, according to Johns Hopkins Medicine. “All three vaccines authorized or approved by the Food and Drug Administration (FDA) have been thoroughly tested and found to be safe and effective in preventing severe COVID-19,” Johns Hopkins wrote. In fact, the vaccines are saving lives. According to Healthline, the coronavirus vaccines have saved over 140,000 lives in just five months.

He repeats the same points over before the video ends. In the comments section, multiple viewers claimed that the man was acting like a child and joked about how his argument was seemingly unprompted. “MAGA Men are so emotional,” one of the top comments read.

“It’s a one-man argument,” another joked.

Others expressed that they felt sorry for his wife, who was continuously trying to calm him down throughout the clip.