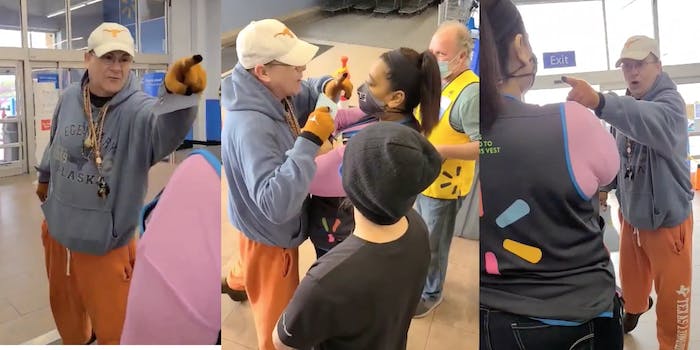 They're just trying to enforce the store's mask policy.

A male Karen was recently spotted in a Walmart in Alaska having what could be the biggest anti-mask meltdown of 2020.

Footage of the incident shows the unidentified man refusing to leave the store while berating numerous employees.

“Get back on your highway to hell and get out of a godly man’s face!” the man said.

The man continued to make bizarre statements as the situation intensified.

“By your very blind ignorance, you don’t have the ability to even come up with your own fucking ideas,” the man stated.

Despite being asked repeatedly to vacate the store, the man argued that he would only leave on his own terms.

In typical Karen fashion, the man then demanded to speak with the Walmart’s manager. But the employees weren’t having it.

As he finally headed towards the door, the man turned around and proceeded to give the middle finger to one of the employees.

“Please, return to your service of Satan and your ignorant belief that you’re right!” the man said.

The man goes on to ramble further about his right to life, liberty, the pursuit of happiness, and apparently Walmart savings while in the face of the employee.

In a statement to Heavy, a Walmart spokesperson commended the employees for showing patience during the tense situation.

“It’s unfortunate that this individual chose to express their displeasure in such an inappropriate manner, but we’re proud our associates displayed patience and professionalism as they navigated this challenging situation,” the spokesperson said.

Walmart’s mandatory face mask policy was instituted just last month. The company previously had only enforced the policy in locations where state-wide mask mandates were in effect.