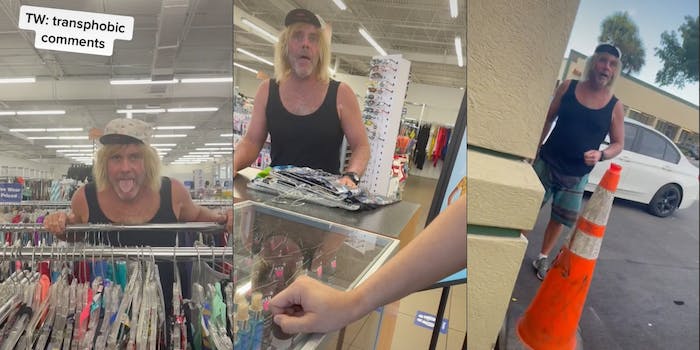 ‘That man was literally so terrifying’: Male Karen harasses and follows Goodwill customers in viral TikTok

This appears to be the second time the man has gone viral for yelling at people.

Video footage posted to TikTok on Monday shows a male “Karen” harassing two women and yelling transphobic comments at them at a Goodwill store in Lauderhill, Florida.

The TikTok, posted by @yikesammy or Sammy Rose, quickly went viral with over 21 million views and over 5 million likes. But this wasn’t the man’s first time in a viral video.

The Daily Dot previously wrote about the same male Karen in August 2020. A video posted to Reddit showed the man, both shirtless and maskless, inside an Ulta store that required customers to wear face masks at the time and shirts always. He yelled at the store’s employees and called one of them “retarded.”

Almost one year later, he’s back to his Karen ways.

The TikTok posted by Rose shows the man making rude tongue gestures at Rose and her cousin, then seems to hiss or make some other unusual sound at them.

“So you want us to call the police?” Rose asked him. He nodded and said, “Call the cops.”

He then turned to an employee, saying “I need a hug,” but the employee wasn’t buying it. The Karen became defensive and tried to blame Rose and her cousin for the altercation but stumbled over his own transphobic words.

“She started—he started—he, she,” he said, but the employee cut him off, repeatedly saying “no.” Then the Karen declared, “Caitlin Jenner is my hero,” in what seems to be an attempt to justify his actions.

Rose and her cousin began walking away toward the store’s exit, but the man continues to yell at them.

“You’re not a girl, you’re a transexual,” he yelled.

The employees began to apologize to the two women when they reached the exit, and the man took the opportunity to continue harassing them. He claimed he was “literally being nice to them” and “then they got rude.”

When the man shook a store sign at the two cousins, an employee told him to pay for his items because he was going to have to leave the store. But the man replied that he was waiting for the two women to leave so he could “finish his shopping experience.” Then he suggested that he leave with the women.

The employee continued to tell the man to leave, but he became more defensive, claiming that the women, who he described as “freaks,” came at him when he was talking to other employees.

Rose explained in the comments of the TikTok that the man was harassing the employees then turned to Rose and her cousin to talk to them too. They told him not to talk to them and to leave them alone. The man got angry and called the women a transphobic slur. When they began to walk away, he followed and started “swinging” at them.

After he called them “freaks,” Rose and her cousin told the employee that they wanted to leave but the man threatened to follow them, so they didn’t feel safe leaving. Once they exited the store, the man did follow them.

Employees can be seen in the TikTok convincing the man to go back in the store and leave the women alone. The women get in their car and presumably drive away.

TikTok viewers were just as disgusted at the Karen this time as they were last year.

“Why is his tongue moldy…” one user asked.

“I would have pepper sprayed him right when he stuck his tongue out,” someone else said.

Several viewers applauded the Goodwill employees for standing up for the women.

“The employees need a raise they were so protective over y’all and put ur safety first that’s incredible,” one user commented.

“Thank goodness for those workers. I’m so sorry you had to go through that that man was literally so terrifying,” someone else wrote. A different user commented, “Those beautiful employees need a raise… idk how any of you didn’t choose violence.”

Rose did not respond to the Daily Dot’s request for comment.