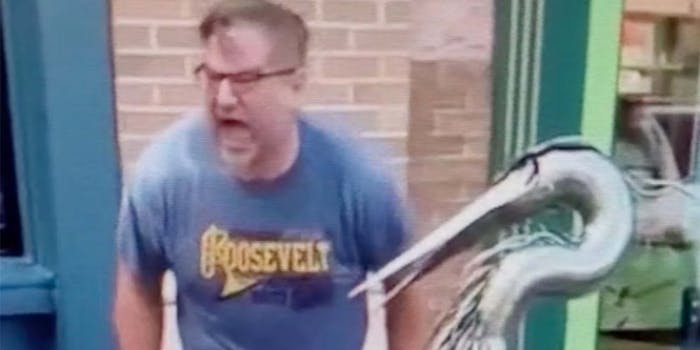 ‘This guy is on his way to a heart attack’: TikToker says male Karen had public meltdown over BLM and Pride signs

'Is anything really worth this much anger?'

In a viral TikTok, a man is seen yelling at people in public about violence and free speech. The man allegedly drove “past signs supporting BLM and pride month” and got “triggered,” according to text on the video.

The clip has been viewed over 33,000 times since being posted on Aug. 30 by @michaelbruneau.

“How much violence over freedom of speech will you allow?” yells the man in the video. The man, red-faced, is flailing his arms around and screaming at people surrounding him outside what appears to be a string of businesses.

While he never overtly references what he is upset about in the video, the text overlay alleges: “This guy drove past signs supporting BLM and pride month… needless to say, he was very triggered!”

“How much violence for silencing people?” he continues before implying that he is “not the problem” because a man “burnt him with a bottle.”

One of the people the man is seen berating asks what violence he is referring to, and how it is violence that they, the people on the street, have incited.

“You’ve been so violent,” says the man.

“Is anything really worth this much anger?” wrote @michaelbruneau in its overlay text. “This guy is on his way to a heart attack.”

The comments on the clip has since been turned off.

The Daily Dot has tried to reach out to @michaelbruneau via TikTok direct message.