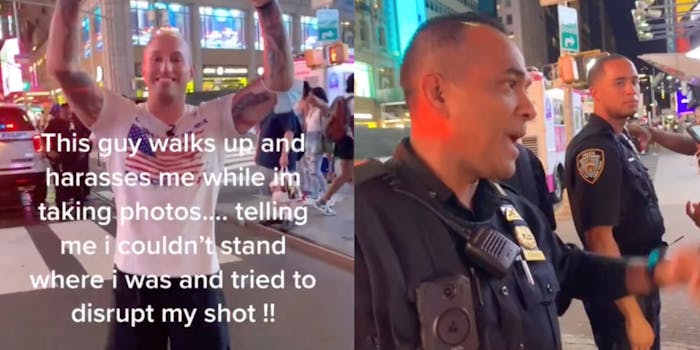 The TikToker tried walking away, but the Karen followed.

A photographer whose shot was obstructed by a man in a New York City street has shared a video of the encounter to TikTok, garnering 252,500 views on the platform. Some commenters are calling the man a Karen.

The video shows a man in an American flag t-shirt walking up to photographer @glassrabbit85 with his hands raised all the way up, blocking the photographer’s shot of the plaza.

“This guy walks up to me and harasses me while I’m taking photos… telling me I’m not allowed to stand where I was and tried to disrupt my shot!”

The photographer, identified on his TikTok account as Roy Jetson, appears to be walking away from the man and trying to avoid him. However, the man follows. When Jetson gets the attention of a police officer and asks him to intervene, the man tries to chat with the officer.

“He even brushed his arm against me to provoke a reaction out of me… because we were in front of the police,” Jetson wrote. “He’s obviously one of the guys they wouldn’t allow on the force… total loser.”

Jetson, in text overlay on the video, wrote that the man tried to lie to the officer about what happened. In the video, Jetson declares he is a cameraman trying to work

In the video’s comment section, people began roasting the man wearing the American flag shirt, mostly for his appearance.

“The peaches in my kitchen got more hair than him,” one commenter wrote.

Another commenter claimed that the video only showed one side of the story—that Jetson was harassing the police and the man “took up” for them. However, Jetson countered that he had permission from the police to record from where he was standing.

The Daily Dot has reached out to Jetson via TikTok message and comments on the video.