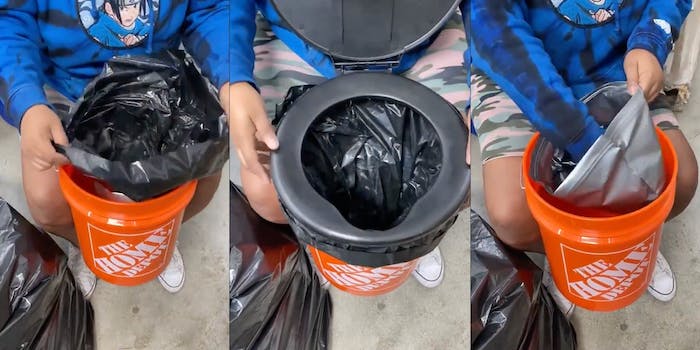 ‘Heartbreaking’: People are pissed after seeing tutorial on makeshift toilet for homeless community

The video is sparking a debate on the inhumane treatment of the unhoused in the U.S.

A tutorial on how to make a makeshift toilet for homeless citizens is sparking debate about the inhumane treatment of the unhoused in the United States.

The video was posted on Twitter by Shirley Raines, founder of the LA-based homelessness nonprofit Beauty2theStreetz, as a way to demonstrate how she utilizes the portable toilet lids donated to her organization. The clip shows step-by-step instructions on how to create a portable loo using the lids, a bucket, a garbage bag, cat litter, and a sealed bag.

Twitter users reacted with mixed emotions, with many lauding Raines for her ingenuity and others expressing outrage that such provisions had to be made in the first place.

“You are absolutely phenomenal!!!” @NaomiLoren_ wrote, praising Raines. “Been following your work for years and I absolutely love it. Thank you so much for being a light.”

“This makes me so f*cking sad.” @taroteahime quote-tweeted. “We are the richest country in the world but have half a million homeless people, many of whom don’t have access to toilets. What the f*ck man.”

“Yea I’m happy somebody doing something but I can’t help to think they prolly would feel more seen with a place to live and a real toilet but baby steps I guess,” @CINCOMALO tweeted.

Other viewers said that the video made them reflect on their own lives and privileges.

“It’s crazy I NEVER thought about how hard it would be for a homeless person to just use the bathroom,” @HesAGemini wrote.

“This brought tears to my eyes… something we take for granted too. Omg,” @brownskincess tweeted.

In a recent report released by the United States Department of Housing and Urban Development (HUD) in March, there were an estimated 580,466 people experiencing homelessness during their annual point-in-time count last January. A point-in-time count reflects the total amount of homeless individuals accounted for during a single night in January. The latest numbers do not yet reflect the effect that the pandemic has had on homelessness, as the data was collected before major pandemic shutdowns occurred in the U.S.