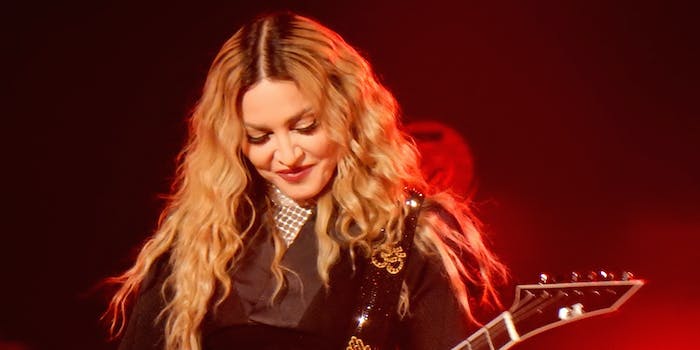 She posted three photos of her Black twins next to watermelon slices.

People on Twitter are furious that Madonna posted photos to Instagram of her Black children posing with slices of watermelon.

The singer posted three photos on her Instagram story this week of her Black daughters, Complex reported. The photos are no longer available on Madonna’s story, as Instagram stories are only available for 24 hours after the user posts them. But the series, which has been reposted to Twitter, shows her twins Esther and Stella, who were adopted from Malawi in 2017.

In separate photos, the girls are seen posing against a wall in the distance, smiling and with their arms raised. A slice of watermelon is held close to the camera to project the illusion of a skirt or a dress on the girls.

The girls, who were 5 years old at the time of their adoption, look happy—but are likely unaware that they’re at the center of a photo with racist implications. The watermelon was historically regarded as a symbol of emancipation for the Black community and has over time been positioned in cartoons and messages as a racist attack on the Black community.

As the Atlantic wrote in 2014, “Southern whites, threatened by blacks’ newfound freedom, responded by making the fruit a symbol of black people’s perceived uncleanliness, laziness, childishness, and unwanted public presence. This racist trope then exploded in American popular culture.”

Twitter users condemned Madonna for the photos, especially since it’s not the first time she’s been accused of making racist comments about her kids.

Of Madonna has enough art sense to hang that Picasso, she certainly knows a watermelon skirt on a black child is offensive.

Some also pointed out that Madonna only shared photos of her two Black children even though she has six children, two of whom are white.

Madonna uses her black kids for performance racism, that's how she stays relevant

If Madonna would've posted all of her kids behind watermelon it wouldn't be a problem but the fact that she chose only the black kids shows how ignorant she really is.

Madonna got her black kids posing with watermelon on social media in 2019? pic.twitter.com/7QQMJ2k4o2

As Complex notes, in 2014, Madonna wrote “Dis[N-word]” alongside a photo of her son. Following public outrage, she apologized and deleted the post.