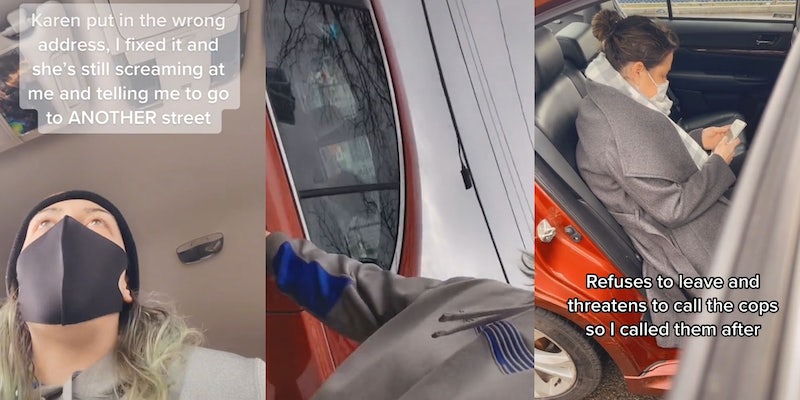 'I just wanted to go to the court house.'

A Lyft driver recorded an interaction she had with a woman who refused to leave her car after she insisted the driver didn’t take her to the right destination.

In the video, the driver can be seen recording herself as she repeatedly asks the “Karen” to leave her car. The text on the video says, “Karen put in the wrong address, I fixed it, and she’s still screaming at me and telling me to go to another street.” The so-called Karen and the driver continue to argue back and forth, “You’ve been screaming at me the whole time, you put in the wrong address, get out!” the driver yells back.

The Karen continuously tries to justify her tirade by saying things like “I just wanted to go to the court house” and trying to blame the driver for going to the wrong address—which the driver had to explain multiple times that she doesn’t have anything to do with the address.

The situation escalated until the driver got out the car and called the police to try and get the Karen out of her car.

The driver’s initial video got over 6 million views and the comments were mostly supportive of the driver. “You stronger than me, I woulda grabbed that bun in a heartbeat,” one person commented. Another defended the “Karen” saying, “You acted like a total witch to her.”

The driver also confirmed in another comment that the “Karen” was still charged for the ride and the driver still got paid.

In a second video, the driver said that once she got on the phone with the police, the “Karen” got out of the car.

Update 3pm CT, April 23: The driver told the Daily Dot she recorded “for evidence of her not leaving” and eventually “threatened to call the police.”

“She then got out,” she said of the woman.

She said she wants people to understand that “a rider not being able to give me a proper address is not my fault and it is actually scary as a woman driver.”

“Any rider that tries to take you off course could be luring you into an unsafe situation. A rider who yells at you during the ride jeopardizes the safety of them both,” she said.

“Stop treating service workers like crap and expect them to still serve you with a smile,” she added.

She said she doesn’t have issues with customers often but that when she does, Lyft always “takes my side and compensates me and removes the rider.” She pointed to how long she’s worked as a Lyft driver—three years—and to her rating, which she says is five stars.

She called it “frustrating” that some viewers were telling her she was “in the wrong.”

“If my own company understands that I cancelled the ride for safety concerns, everyone else should too. And you think me yelling at someone legally trespassing on my property is wrong? Tell that to people defending their cars and home with weapons or actual force. I just used my voice. As I have the right to do,” she said.

The Daily Dot reached out to Lyft via a media contact.