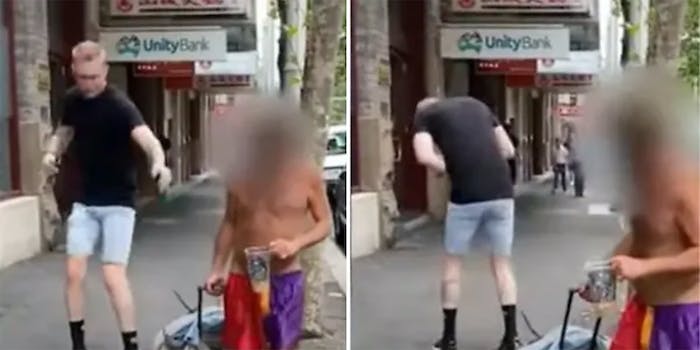 'You have just proven that you have a complete lack of empathy...'

Australian YouTuber Luke Erwin is being crushed on social media for a particularly heinous video showing him pretend to sneeze on a man experiencing homelessness as a prank for views.

Erwin, who has over 387,000 followers on YouTube, removed the video following social media outrage, given his apparent disregard for the less fortunate and COVID’s disproportionate effects on the poor and the houseless.

The now-deleted video shows Erwin walking toward a shirtless and shoeless man, whose toting around his belongings. He sprays mist from a green bottle across the man’s back and pretends to sneeze onto him. After the man predictably turns around, Erwin grabs his nose while hiding the spray bottle.

The man appears to be unaware of the joke and essentially shakes it off as simply a sneeze.

Erwin, as per usual on his page, is looking for a cheap laugh. He has other “sneezing” videos in his YouTube catalog.

It appears the first instance of these pranks occurred for April Fool’s 2017.

He did it again, at home in Sydney.

“Imagine sitting around with your group of friends thinking how you need new content and thinking of this bright idea to go out into the public and pick on the less fortunate,” said one commenter per Daily Mail UK and 7 News.

“You have just proven that you have a complete lack of empathy towards other human beings,” said another detractor.