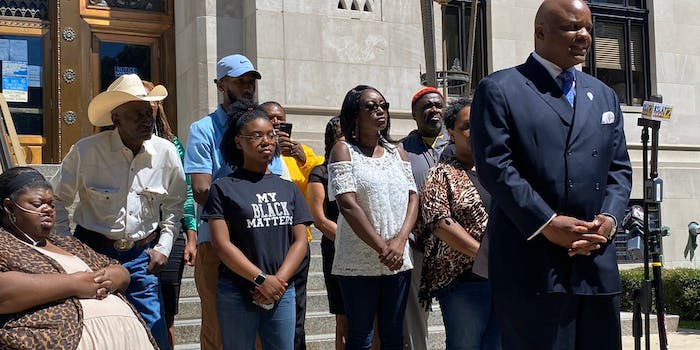 The officers could face up to 10 years in prison.

Four Louisiana police officers have been charged with negligent homicide and malfeasance after a video released in June showed the officers beating a Black man who later died, the Root reports.

After McGlothen died, the four officers told McGlothen’s family that he died of a heart attack, per the Root.

The Caddo Parish District Attorney’s Office, which did not immediately respond to the Daily Dot’s request for comment, announced Friday that Treona McCarter, Brian Ross, D’Marea Johnson, and James LeClare were indicted by a grand jury following evidence that the four officers used excessive force and did not seek medical help for McGlothen, per the Root.

If convicted on both counts, the four officers could face up to 10 years in prison each, the New York Times reports.

LeClare’s lawyer, Dhu Thompson, told the New York Times that he was “extremely disappointed” with the decision and is confident his client will be “fully exonerated.”

The Shreveport Police declined the Daily Dot’s request for comment.

McGlothen’s family said they thought the grand jury “made the appropriate decision,” according to the Shreveport Times.

“We are very grateful and thankful to them for committing to impartial administration of justice in the indictment of the four officers involved in the untimely death of Tommie McGlothen Jr.,” Carter said, per the Times. “I am so thankful to the citizens of this city as well as the McGlothen family.”