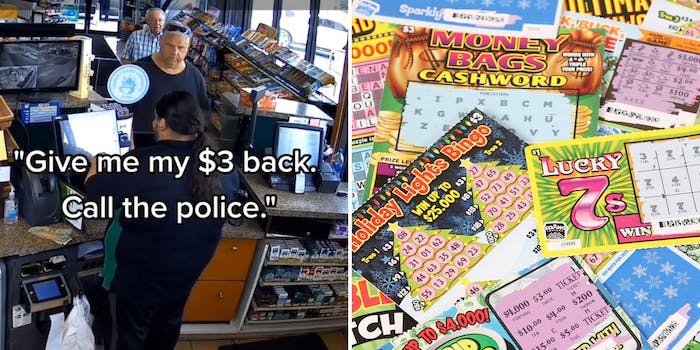 ‘If you can’t afford a $3 mistake you shouldn’t be gambling’: Video shows man trying to return $3 lottery ticket at gas station

A customer realizes a $3 mistake and takes it out on the cashier, asking to get the police and owners of the gas station involved.

Security footage shows a gas station customer trying to call the police over a $3 lottery ticket. The incident went viral on TikTok and has reached over 2.5 million views.

Posted by @gasstationantics, the original video shows a customer purchasing a lottery ticket and submitting it to the cashier.

After the cashier runs the $3 ticket, the customer realizes his mistake. Apparently, he wanted those numbers for a different game and asks to cancel it.

The cashier explains you can only cancel certain games—and not the one he was playing. The customer is furious and won’t take no for an answer. He keeps pressing the cashier to hand back his $3.

“The computer is telling me I can’t,” the cashier explains.

From there, the customer becomes truly irate. He suggests they should call the police and get the owners of the gas station owners involved.

“I made a mistake,” he admits, but will not stop pressing the cashier.

At one point, another customer jumps in and offers to pay for the ticket, but the man is insistent he needs his $3 back from the cashier. “I just wanted you to get the hell out so we can go,” the second customer says.

A manager identified as Brenda is heard off-camera explaining that their hands are tied after the system has already cashed the ticket. The video ends with the man still standing at the front of the line and still demanding his money.

TikTok users were exhausted by the customer’s antics and his demands over a $3 ticket. For many, it was another example of the insulting behavior that retail workers deal with regularly.

“When you tell a customer, ‘no I can’t do that’ and they say ‘yes you can’ literally makes my blood boil, like sir do you work here?” one viewer said.

Most people though were shocked at the low stakes at the center of the ordeal.

“If you can’t afford a $3 mistake you shouldn’t be gambling,” another user wrote.

The Daily Dot reached out to @gasstationantics via TikTok comment.