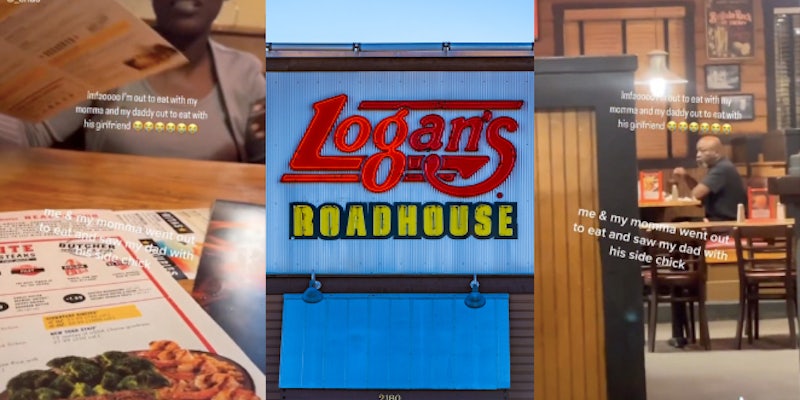 'I would’ve walked up and spoke and said see you at home.'

A woman says that she spotted her father eating at a Logan’s Roadhouse with another woman while she was there with her mother in a now-viral TikTok.

In the video posted by TikToker Lori (@_eria0) on Aug. 13, she shows a clip of her mother across the table from her at Logan’s. She pans over to a man sitting across the restaurant with another woman, and her mother asks, “You see your daddy?”

The video has reached over 397,000 views as of Wednesday, with commenters sharing how they would have reacted in the same situation.

“Would’ve sent a dessert, and made sure the waiter said ‘complements of your wife and daughter,’ bc i could NEVERRR,” one commenter said.

“As his daughter, I would of went right up to him n said ‘Dad, me n your wife are sitting at a booth you want to join your family!'” another wrote.

“Ida said five my check to my husband as he’s buying tonight,” a third added.

In a comment, Lori explains that her mother and she “were going to a dinner party at briquettes, but it got canceled last minute,” ending up at the restaurant at the same time as her father “randomly.”

When asked if she confronted her father at the restaurant, Lori replied, “yes we spoke!” but has not shared further details.

The Daily Dot reached out to Lori via TikTok comment.