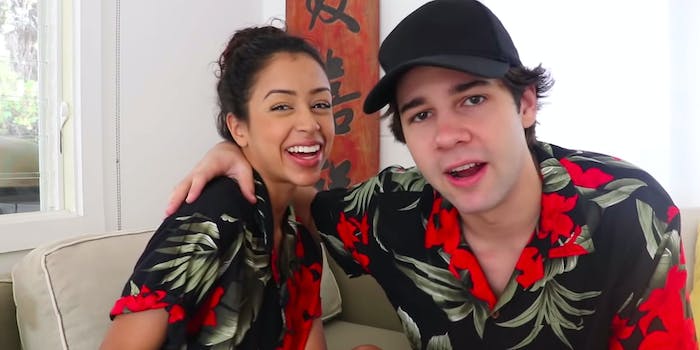 They pretended to speak Japanese in the 2016 clip.

Liza Koshy on Sunday released a statement apologizing for a video she and popular YouTuber David Dobrik made in 2016. The former couple, who dated from 2015 to 2018, is facing backlash for making fun of the Japanese language in the resurfaced clip.

In the video, Koshy and Dobrik are trying “foreign” candy and at one point, they pretend to speak Japanese. David says, “It’s not racist, that’s like the sounds I hear when they talk.” Liza then doubles down on his comments, saying, “No, it’s not racist as long as I keep saying ‘no.'” She says this more than once as he continues to make racist jokes.

TikTok user @callmesukiwi called out the duo in a video on June 21 with the caption, “Why is no one talking about this? It’s a clear example of the normalized racism against Asians.” The text in the video says, “They’re trying Japanese candy and pretending to talk in Japanese as a joke. Isn’t that still… racist???”

Late Sunday, Koshy addressed the controversial video and apologized for her actions.

“While we focus on systemic anti-black racism in our country, I’ve been hesitant to center my voice. My work has been within but I now recognize and take responsibility for the times I was not the ally I am becoming today,” Koshy wrote. “Being anti-racist requires a personal reckoning, and I can’t in good faith continue to use my platform for progress without taking accountability myself.”

She continued: “As a woman of color and a self-defined ‘little brown girl.’ I have experienced the harm of prejudices in my own life. However, this really does not exempt me from the responsibility of acknowledging the times I’ve unknowingly perpetuated racist ideas … Consider this my resignation from ignorance, and my declaration as an ally in action.”

Dobrik has not released any comments regarding the controversy.