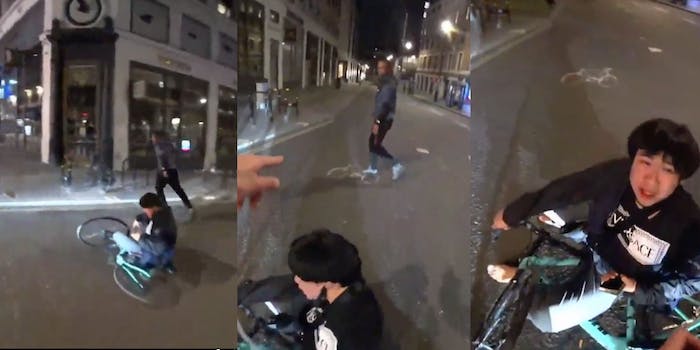 'Respect to the streamer for actually stepping in and helping.'

A live streamer foiled an attempted mugging in west London on Friday, April 9, when he spotted an Asian man being attacked and sprung into action.

The live streamer, who goes by the name Sherwin, was perusing the streets near London’s Leicester Square when he spotted the attack. A brief video shared to Reddit’s r/PublicFreakout shows the streamer jumping to the man’s aid, sprinting across the street to interrupt the suspected mugger.

In the 8 hours since it was posted, the footage on PublicFreakout has received more than 35,000 upvotes and a slew of supportive comments.

The one-minute clip is cut to only include the attack. Sherwin is noticing the attack as the footage begins and pivots the camera toward a nearby street, where a man can barely be seen crouching over another person. Sherwin immediately takes off toward the attack, shouting repeatedly for the attacker to “leave him alone.”

The suspected mugger takes a few nervous steps away as Sherwin reaches the two men. A young Asian man can be seen on the ground, tangled in his bike and bleeding from a small wound on his cheek. The attacker lunges in for another attempt at the grounded man, forcing Sherwin to circle around and chase him away yet again. All the while, the victim pleads with Sherwin to “call the police.”

A third attack nearly follows as the suspected mugger sidles a few dozen steps away before turning and running back toward Sherwin and the still-downed man. A trio of men approaching from the side dissuades him from engaging again, and the mugger finally takes off down the street. Sherwin immediately begins dialing the police while explaining to the men that “he was kicking him. He tried to curb-stomp him.”

In the last few moments of the video, Sherwin manages to connect with police. He provides the phone to the victim, who informs police of their location just as the video cuts out.

Comments on the Reddit version of the video overwhelmingly support the streamer’s quick action.

“Respect to the streamer for actually stepping in and helping,” one commenter wrote.

Other viewers expressed their surprise that the attacker came back not once but twice.

“I can’t believe the thief tried to come back TWICE,” one commenter noted. “Even after he saw he was on camera and the police was being dialed.”

A longer version of the video, posted to Sherwin’s YouTube page, shows the moments leading up to the altercation, as well as the aftermath. Sherwin was attempting to meet up with his Uber when he realized the attack was happening and dropped everything to lend his aid. The victim also labeled the attack, when speaking with police, as “attempted murder.”

He told police that the man had a knife, which he used to threaten the victim before Sherwin intervened. The streamer’s footage came in handy when he spoke to police, who used the video to help determine a suspect description.

The Daily Dot has reached out to Sherwin.

Update 1:29pm CT, April 12: In an interview with the Daily Dot, Sherwin noted that he wasn’t sure what spurred him to run to the man’s aid.

“I saw someone was in danger, I didn’t think about it at all,” he said.

He went on to note that he doesn’t want to be part of the “scuffed, degenerate, poisonous & toxic IRL Live-streaming ‘community’ that just drink, fight, bully, press & harass people.”

“I want to be a better person, a better live streamer, and I want to entertain and make people smile, laugh and cheer em up in these uncertain depressing days & months we’re stuck in,” he added.

He also shared a text conversation between him and the man he saved, who Sherwin identified as Raymond. In the shared conversation, Raymond told Sherwin that he is “alright, recuperating steadily” but that his injured head “fucking hurts and is completely swollen.”

After his video went viral, Sherwin says several people reached out and helped him identify Raymond. We’ve reached out to Raymond.