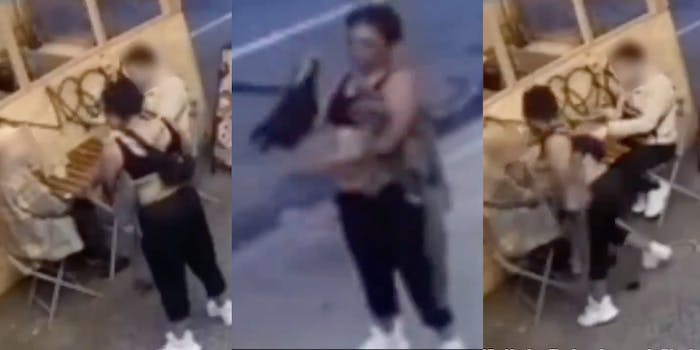 'I don’t want you talking.'

A recent video shows a woman hurling anti-Asian insults at another woman who is speaking Mandarin, then slapping her in the face.

The victim, a 25-year-old woman, was meeting with a friend in Manhattan’s Lower East Side when the attack occurred, the New York Post reports. Surveillance footage captured the brief exchange and prompted an investigation by the New York Police Department.

The woman and her friend were sitting at a table on Grand Street around 7:30pm Wednesday when a stranger approached. The unidentified woman, dressed in a black sports bra, black pants, and carrying a gray sweater, reportedly overheard the duo speaking Mandarin.

“I don’t want you talking,” the woman allegedly told the pair. “Shut the fuck up! Go back to your country!”

She then began walking away, only to pivot and return. Video shared by @NYPDnews on Twitter shows the assailant leaning in and slapping the Mandarin-speaking woman across the face before fleeing the scene.

Police describe the attacker as a woman in her mid-30s with “short black hair” and a “thick build.” She is assumed to be approximately 5-foot-5 and 180 pounds.

The incident is the latest example of anti-Asian racism, which has become increasingly prevalent in the United States over the past year. Numerous stories of Asian Americans getting harassed and attacked have emerged during the COVID-19 pandemic, which in part prompted the director of the CDC to declare racism a “serious public health threat.” And last month, a white man shot and killed eight people, six of whom were Asian, across three Atlanta-area spas in a spree that many have classified as a hate crime.

In an emailed statement to the Daily Dot, Detective Annette Shelton of the NYPD said, “There are no arrests at this time and the investigation is ongoing.”

The NYPD is asking for the public’s assistance in tracking down the woman seen in the video. Anybody with information is encouraged to DM @NYPDTips on Twitter or anonymously call 800-577-TIPS.