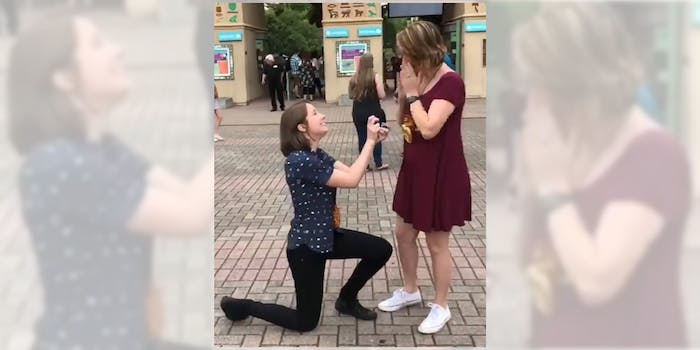 This isn't the first lesbian double proposal, either.

When it’s time to tie the knot, both partners usually can sense it. But one couple took this serendipity to the next level, with both women proposing to each other at the same time.

Last Friday, Becky McCabe and Jessa Gillaspie were visiting the Memphis Zoo, where the couple originally went on their first date. McCabe figured she’d use the opportunity to propose to Gillaspie, and she purposefully had a friend planted there to capture the moment on video when she popped the question. So when McCabe and Gillaspie went to pose to remember the day, McCabe asked Gillaspie for her hand—but then Gillaspie surprised her partner with a ring of her own.

“Oh my god!” Gillaspie squealed in the video, before she brought out her ring box, causing the couple to laugh uncontrollably before hugging one another.

The couple’s proposal has since gone viral for being hilariously touching and adorable.

“lesbians accidentally proposing to each other at the same time” is my favorite genre of film https://t.co/vq92dgkbc7

At this rate, “Double Lesbian Proposal” is set to become a viral video genre of its own. Earlier this year, a lesbian couple proposed to each other while playing Pictionary, too.

this is the second double proposal lesbian video i've seen, wh y are we like this omg https://t.co/o66XTDj68M

Straight proposal videos: this man proposed to a woman in public and it made it her uncomfortable/at an event that was in her honour and stole her moment

Lesbian proposal videos: these women understand each other so much that they planned to propose at the same time

the lesbian way: so prepared and ready for a mutual lifetime commitment that the only possible outcome of a potentially awkward public proposal is that you both propose at once https://t.co/20OllWGhkx

If you’re now frantically searching for ‘lesbian double proposals’ like me, here’s another good one: https://t.co/iOsjUKdbWo

lesbians are so fucking good at this marriage thing https://t.co/S3BlJ4R3cg

McCabe and Gillaspie are incredibly grateful for all the love they’re received online. Gillaspie’s original Facebook post has over 20,000 reactions and more than 17,000 shares, with Gillaspie saying she is “the luckiest girl in the world to be able to call [McCabe] my fiancé.”

“We had no idea this would blow up so quickly!” Gillaspie wrote in an edit to the Facebook post. “But I can’t say I’m not thrilled, because all I’ve ever wanted was for Beck and the world to know how much l love her. We are overwhelmed with all of the positive responses. Really, you guys have no idea how much that means to us!”