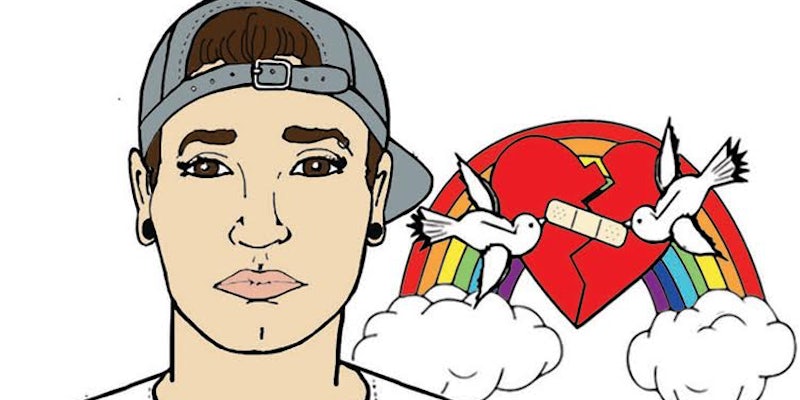 Illustration excerpt from Chin Up, Dreamboat by Nawwal Moustafa

‘Chin Up, Dreamboat’ is the breakup coloring book that lesbians need

A lesbian breakup is a powerful thing indeed.

The onset of spring is a beautiful time, but for many it’s also breakup season. Not every couple makes it through the depressing isolation of winter, and some hang in just long enough to have someone to keep them warm before the sun returns and brings a giant reality check along with it.

Nawwal Moustafa is only 26, but she’s already been through a lesbian divorce. The Portland, Oregon-based comedian and illustrator knows firsthand just how epically devastating the lesbian breakup can be. Instead of wallowing in the pain, however, she channeled it into the creation of a coloring book designed to help her fellow queer women through the tough times.

Moustafa’s coloring book, Chin Up, Dreamboat! A Creative Companion for Lesbian Breakups, is slated for publication in May. The entire project is self-funded, so Moustafa—a teacher working with at-risk kids by day—took to Kickstarter to cover printing costs.

Chin Up, Dreamboat’s Kickstarter campaign ends on March 13 and by then, Moustafa hopes to have enough backers to fund multiple print runs of the coloring book. The incentive swag—tote bags, t-shirts, and pencils with the CUDB logo—will be available permanently on the project’s website.

For the recently split, the book serves not only to comfort but to engage—idle hands, after all, lead to excessive self-torture through stalking your ex’s Facebook and Instagram photos. “I have a very strong love for things that get people involved,” said Moustafa. “Especially in this scenario, it’s asking you to finish me, to fill me in. It’s taking things that might not be ideal and figuring out a way for it to be fun and to be worth it.”

Illustration excerpt from Chin Up, Dreamboat by Nawwal Moustafa