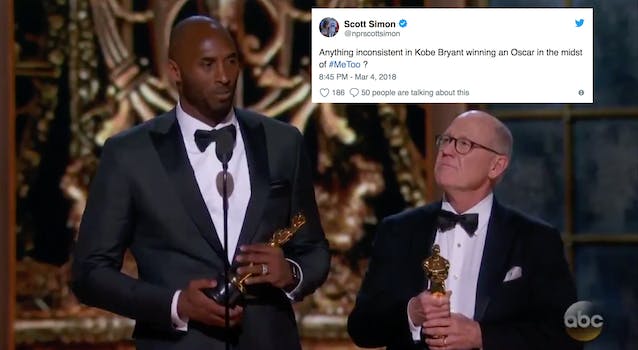 Twitter pointed out that Bryant has been accused of rape.

Former NBA star Kobe Bryant won an Oscar on Sunday for his animated short film “Dear Basketball.” The internet both praised his win—and pointed out that he’s yet another Academy Award winner who has a history of sexual assault allegations.

Amid an Oscars ceremony that follows a year of the conversations around sexual assault allegations—and the following #MeToo and Time’s Up movements—people on Twitter questioned the double standard of the Academy to award Bryant despite the accusations against him.

Anything inconsistent in Kobe Bryant winning an Oscar in the midst of #MeToo ?

kobe bryant has as many oscars as sexual assault charges

"Last I checked, time was motherfucking up." -Jane Fonda under her breath as Kobe Bryant walks by

In 2003, Bryant was charged with rape when a 19-year-old hotel staffer said the basketball star assaulted her in Eagle, Colorado. Kobe was never prosecuted and maintains that he had consensual sex with the accuser.

“Although I truly believe this encounter between us was consensual, I recognize now that she did not and does not view this incident the same way I did,” Kobe said in a letter of apology at the time. “After months of reviewing discovery, listening to her attorney, and even her testimony in person, I now understand how she feels that she did not consent to this encounter.”

Kobe Bryant's apology to the woman who accused him of rape. pic.twitter.com/ezsctMGm4N