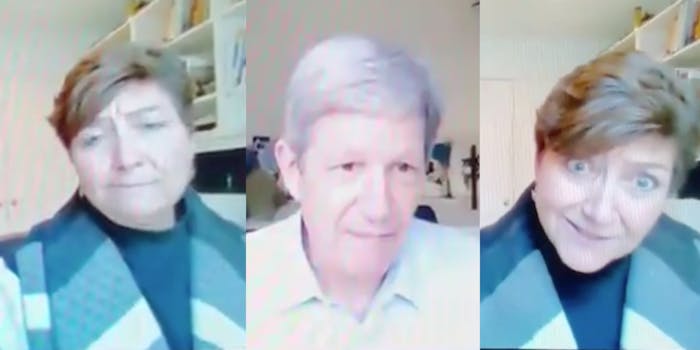 'You get some really good ones, but there are also usually some that are just plain at the bottom.'

A Georgetown Law professor has come under fire for a Zoom video that shows her complaining that her lowest-performing students are “mostly Blacks.”

The professor, identified on Zoom and by the Georgetown Black Law Students Association as Sandra Sellers, wastes no time making sweeping generalizations about her students while talking to her colleague, David Batson.

Batson can be seen nodding along as she continues, though he does look uncomfortable. “It’s like, ‘Oh, come on,'” Sellers says with a laugh. “You get some really good ones, but there are also usually some that are just plain at the bottom. It drives me crazy.”

Viewers were stunned to see a professor at a university on par with Ivy League schools speaking about her students in such blatantly racist terms. Sellers’ reduction of her student body to “Black” and “everybody else,” as well as problematic phrasing such as “some really good ones,” put people on edge.

Instagram user @davenewworld_ uploaded the video last night, where it has already accumulated nearly 8,000 views and more than 150 comments.

“Her Black students aren’t coming up short being because there’s something innately wrong with them as Black people,” a comment from @_colin.jpg_ reads. “Her Black students are coming up short because systemic white supremacy and racist white individuals are actively holding them back, and then blaming them for being behind because they’re Black. She needs to read a fucking book before she tries to teach anyone anything.”

“We learned earlier this week that two members of our faculty engaged in a conversation that included reprehensible statements concerning the evaluation of Black students,” the statement begins. Treanor calls Sellers’ words “abhorrent” and announces that an investigation has been launched.

“I recognize how hurtful this incident is to members of this class, to the members of the Black community, and to members of our community as a whole,” Treanor’s statement continues. “I am committed to taking steps to support students through this and to addressing racism and bias wherever they appear. There is no place for bias in our grading process or anywhere in our community.”