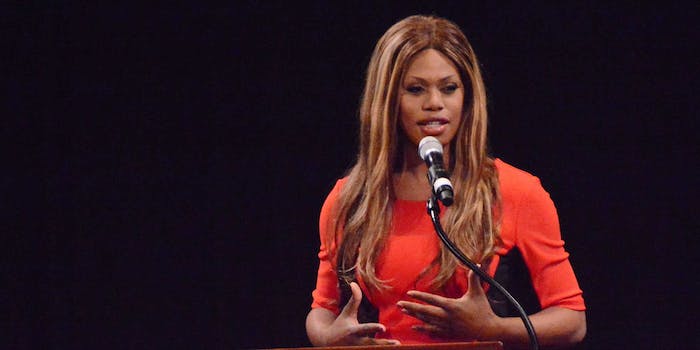 'There are many trans folks because of genetics and/or lack of material access who will never be able to embody these standards.'

Caitlyn Jenner‘s Vanity Fair cover has inspired an outpouring of support across the Internet, marred by only a few transphobic comments from C-list celebrities and media outlets like Fox News.

Jenner has already been described by some as the most famous transgender person in the world, with many people commenting on her stunning appearance in the Vanity Fair photoshoot. This flood of public interest—and fixation on Jenner’s looks—inspired a thoughtful response from Orange Is the New Black actress Laverne Cox, who has long campaigned for more inclusive trans representation in popular media.

“Many have commented on how gorgeous Caitlyn looks in her photos,” wrote Cox on her Tumblr. “I must echo these comments in the vernacular, ‘Yasss Gawd! Werk Caitlyn! Get it!’ But this has made me reflect critically on my own desires to ‘work a photo shoot’, to serve up various forms of glamour, power, sexiness, body affirming, racially empowering images of the various sides of my black, trans womanhood.”

“A year ago when my Time magazine cover came out I saw posts from many trans folks saying that I am “drop dead gorgeous” and that that doesn’t represent most trans people. (It was news to be that I am drop dead gorgeous but I’ll certainly take it). But what I think they meant is that in certain lighting, at certain angles I am able to embody certain cisnormative beauty standards.

Now, there are many trans folks because of genetics and/or lack of material access who will never be able to embody these standards. More importantly many trans folks don’t want to embody them and we shouldn’t have to to be seen as ourselves and respected as ourselves . It is important to note that these standards are also infomed by race, class and ability among other intersections.”

Cox ends the post with a message of hope for more diverse trans representation in public life, celebrating Caitlyn Jenner’s bravery as well as the courage of those who do not have access to her wealth and social privilege.

“I hope, as I know Caitlyn does, that the love she is receiving can translate into changing hearts and minds about who all trans people are as well as shifting public policies to fully support the lives and well being of all of us. The struggle continues…”

Photo via KOMUnews/Flickr (CC BY 2.0)