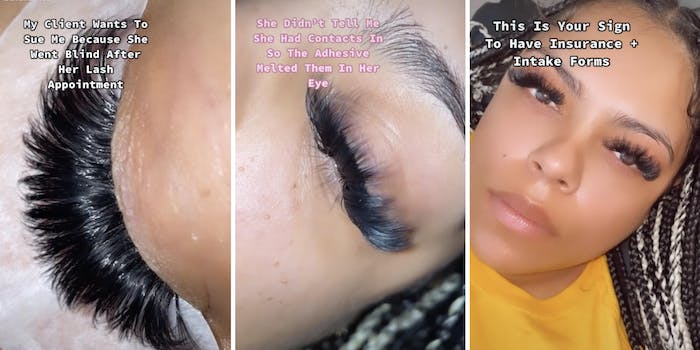 She shared the video as a message to other lash technicians.

A lash technician says a client “wants to sue” her after claiming to have gone blind after an appointment with her.

Ava of Avalashco Lash Supplies posted a TikTok on May 20 announcing that the client didn’t take out her contacts before her lash appointment—”so the [lash] adhesive melted them in her eye.” As a message to other lash technicians, Ava wrote in the video’s overlay text that intake forms and insurance are needed.

On Monday, the TikTok had over 2.1 million views.

Ava posted a handful of other TikToks on the situation, including a demonstration of contact lenses reacting to the fumes of lash adhesive, a screenshot of her intake forms, and an explanation of agreements that she has clients sign that asks clients to remove their contacts. She also says that she took the client to the hospital and that her client said that taking out her contacts—even though Ava says she told her to—seemed like “too much of a hassle.”

While there doesn’t seem to be any official information about wearing contact lenses while receiving a lash procedure available, different service providers and/or outlets seem to be in agreement that contacts being taken out would benefit the client: Chic Lash Boutique states on its website that clients “may” need to remove their contacts, Blissegg says they “might” have to, and Divine Lashes says it is not safe to keep contacts in during the procedure.

In response to comments on all of her videos that blame her for the accident, Ava says in another TikTok that she wishes commenters would “stop trying to make it seem like this is [her] fault.” Some commenters say that even though she told the client to take out her contacts on intake forms, Ava should have verbally confirmed they were taken out before the prodedure.

“It is clearly the client’s fault,” Ava says in the TikTok. She also says that the fumes of the adhesive got into her client’s eyes because she opened them during the service. Ava says she graduated from esthetician school and is licensed as well.

In a TikTok posted on Sunday, Ava says that the client is no longer suing her but that she plans to give the client “free lashes for life.”

Some commenters on Ava’s most recent video accuse her of making up the situation about a client being blinded by lashes and using it as a marketing ploy.

“Marketing Genius,” @_crystalllane_ commented. “It definitely brought me to your page!”

“So this was all a lie?” @kiimari wrote.

The Daily Dot reached out to Ava via email.