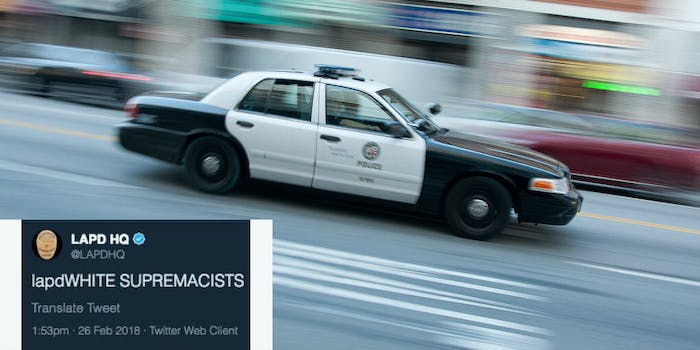 Does the LAPD have white nationalists in its ranks?

looks like @LAPDHQ got hacked for a hot minute pic.twitter.com/m1OsBljA4n

The tweet was, of course, the result of a Twitter hack (though some Twitter users joked that it might have been a search attempt gone awry). Josh Rubenstein, the LAPD’s public information director, quickly sent out a message saying, “We are working to lock it down now.” By Monday evening, LAPD released a tweet asserting that account had been “compromised.”

We are aware that our #LAPD account was compromised and are taking the proper steps to resolve this issue.

The more interesting story, however, is what potentially led to the act of vigilante hacking. On Feb. 25, a day before the hack, writer and podcast host Hayes Davenport tweeted that he had been blocked by the LAPD Hollywood Division for questioning why Capt. Cory Palka followed a number of far-right- and white nationalist-associated Twitter accounts.

The LAPD’s Hollywood account blocked me for pointing out that their commander follows a bunch of white nationalists on here. Can someone remember to text me if there’s an active shooter in the neighborhood or something? pic.twitter.com/eaT8DNQh4e

Hey, is it cool that Cory Palka, the LAPD Captain in charge of Hollywood, follows with his verified account:

-Ann Coulter
-Paul Joseph Watson
-LA for Trump, whose avi is Maxine Waters's face crossed out
-many other white nationalists
-15 accounts with #MAGA in the bio? pic.twitter.com/Qb961OqnQM

In a subsequent tweet, Davenport described some of the accounts Palka follows. He wrote, “You’re right, I hadn’t considered that he follows a New York-based account that “exposes #BlackThugCrime” or a Maryland-based account that says #IslamIsTheProblem to remain informed about community sentiment in Hollywood. Will consider!”

Davenport’s tweet announcing he was blocked went regionally viral, garnering nearly 5,000 retweets and 17,000 favorites as of Tuesday morning. It also reignited discussions about alleged racial bias in the city’s policing. Anthropologist Sekai Farai was one of several to point out the troubling connection between Palka’s Twitter account and some of the policing practices of the LAPD.

“We shld all be concerned that white supremacists are palatable to a police commander,” Farai wrote. “It has an absolute impact on racist policing of black and brown folks. Given what we know about the longstanding intersection of police and racists, this shld prompt a more formal inquiry.”

We shld all be concerned that white supremacists are palatable to a police commander. It has an absolute impact on racist policing of black and brown folks. Given what we know about the longstanding intersection of police and racists, this shld prompt a more formal inquiry.

Since Davenport’s tweet, it looks like Capt. Palko has cleaned up his Twitter a bit. However, he still follows a number accounts with #MAGA and #Oathkeeper in their bios. He hasn’t totally scrubbed his feed of white nationalist or white supremacist leanings, either. For example, Palko follows @1776Stonewall, an account that cosplays as modern, reactionary version of Confederate General Stonewall Jackson.

While Palko’s Twitter is not wall-to-wall white nationalism—he also follows many staple accounts of Boomer Twitter, including Bruce Springsteen and the Ringer NFL podcast—the connection between Palko and white nationalist ideology is corroborated by research that Davenport later posted to his timeline. In a Los Angeles Times op-ed in January, titled “Why Hollywood’s homicide rate shrank as assaults rose—a commander’s unfiltered analysis,” Palka was asked about the declining murder rate in Hollywood. Palka told the paper, “We closed three clubs in Hollywood that were a magnet for the urban crowd of South L.A.” As the reporter notes immediately after, “It doesn’t take a sociologist to figure out ‘urban’ means black.”

In the piece, Palka also cites gentrification as a key part of his strategy for reducing crime in Hollywood. He says, “I’m all for more expensive restaurants coming to Hollywood. I’d rather have the customer willing to pay $10 for a beer over the customer who pays two bucks for a beer.”

While Palka’s language here stops short of explicit white supremacy, it points to socio-economic and racial bias that could be exacerbated by filling one’s Twitter feed with white nationalists and far-right mouthpieces. These concerns are nothing to take lightly, as there has been a good deal of reporting on attempts by white supremacists to infiltrate police ranks, including the LAPD.

In January of last year, the Intercept published an in-depth piece detailing the FBI’s investigations into how white supremacists have weaseled their way into law enforcement ranks across the U.S. In the early 90s, for example, a number of LAPD sheriff’s deputies formed a de facto “neo-Nazi gang,” terrorizing Black and Latino citizens. In response to their campaign of terror, dozens of citizens filed a suit against the city alleging that the gang, known as “The Vikings,” engaged “in systemic acts of shooting, killing, brutality, terrorism, house-trashing and other acts of lawlessness and wanton abuse of power.” A judge found their claims credible after reviewing over 2,000 pages of testimony. Would Palka’s white-nationalist media diet hurt his ability to judge if his precinct had fallen victim to similar ideological infiltration?

Add to that, a “political climate” that has made it acceptable to spread white nationalist rhetoric in public forums. It’s no secret that now, with Trump in office, white supremacy has seen a resurgence in interest across the United States. Last week, The Southern Poverty Law Center published a “Year in Hate” detailing the surge in white nationalism. The report identified a 4 percent growth in extremist groups in America since 2016 and puts the number of white supremacist groups in the United States at over 600. In 2017, 17 deaths were directly attributed to “alt-right” groups, the fastest growing segment of the re-emerging white nationalist movement.

Though the LAPD has commented publicly on the hack, when the Daily Dot reached out to ask if the department suspected a connection between the hack and Palka’s Twitter follows, it had no comment. If Palka has any more white-nationalist ties to hide, social media sleuths will surely, quickly, bring them to light.