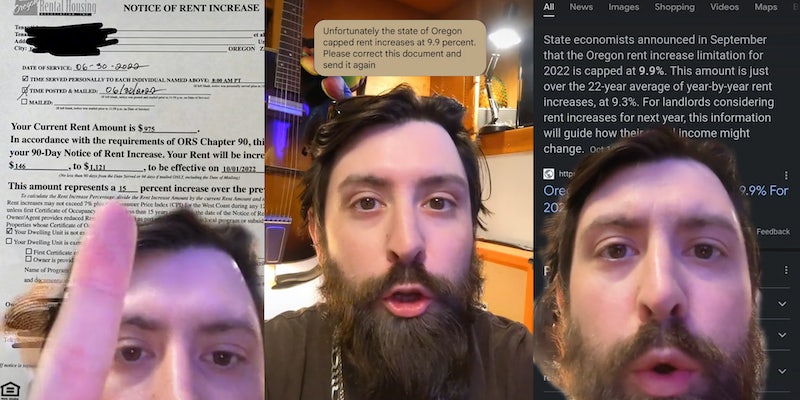 ‘They will take whatever they can get from you’: TikToker catches his landlord illegally raising his rent by 15%

'It’s only illegal if someone notices.'

A man on TikTok says he caught his landlord illegally raising his rent by 15% and then playing dumb about it.

The TikToker, Joe Busch (@residentmusician), is known on TikTok for a previous video about how he got fired for quoting labor laws to his boss. This time, he had to set his landlord straight, too.

In a recent video, Busch says his landlord in Oregon increased his rent by 15%. A “very quick” Google search showed Busch that that was illegal.

This year, the state capped rent increases at 9.9%, according to the Oregonian‘s Oregon Live, however, it only applies to properties more than 15 years old. The cap is a result of 2019 legislation that introduced a statewide rent control policy in Oregon.

The TikToker shares a screenshot of a text message he sent his landlord, saying, “Unfortunately the state of Oregon capped rent increases at 9.9%. Please correct this document and sent it again.”

“My landlord, a lawyer, played dumb and pretended like he didn’t know,” Busch alleges in the video.

Another screenshot shows the landlord’s reply. “You’re correct. I apologize. I will send out a new notice,” the landlord responded.

His video received over 931,000 views as of Saturday. Some commenters encouraged Busch to share the information with his fellow tenants in case the landlord still tries to scam them.

“Make sure that if you have neighbors, you let them know too!” one viewer commented.

“duuuuuude, every renter in OR needs to know this right now, we’re about to see massive amounts of LL increasing rents,” a second viewer said.

A third commented, “They’re raising my rent 30% in oregon but its legal bc that law only applies to buildings more than 15yrs old, you need to mention the full law.”

In reply to that comment, Busch wrote, “I am not here to educate you on the law. This video was made to show that everyone can stand up for themselves. Looks like you know the law tho!”

Other commenters said that actions like Busch’s landlord’s are only considered illegal if they’re caught. That’s why it’s important for people like Busch to quote the rules at them, they said.

“It’s only illegal if someone notices. Like most things now…” one user said.

“They really hate it when I quote the literal hand book of rules they handed me for the company at them,” a second user said.

Another user shared, “I’ve had to threaten to sue both my past landlords for rent raising or late return on my security deposit. Know your renter’s rights!”

The Daily Dot reached out to user @residentmusician via TikTok comment.