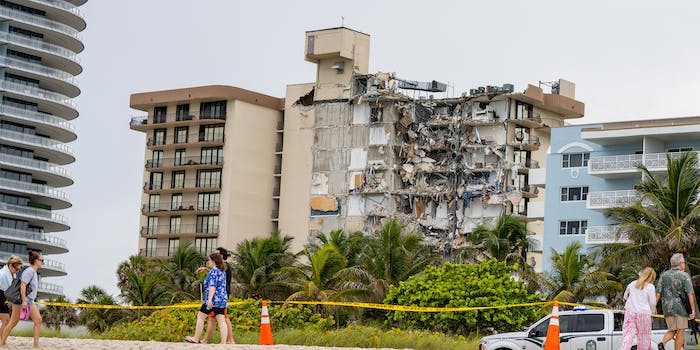 Each call resulted in static.

Jake Samuelson, the grandson of two missing residents of the collapsed Surfside, Florida condo, says he’s received 16 calls from his grandparents’ landline phone since the day of the tragedy.

TikTok user @biggdracco posted a video of a news report that details the situation.

Samuelson told local Florida news outlet WPLG that the first call his family received from his grandparents’ landline was at 9:50pm on June 24, a little over twenty hours after his grandparents’ residence collapsed.

Samuelson’s family received fifteen more calls from his grandparents, Arnie and Myriam Notkin. The final one was on June 25. Each call resulted in static; there was no message from the Notkins. Samuelson told WPLG that his grandparents’ landline was stationed next to their bed.

Champlain Towers South was a 13-story condo building that collapsed in Surfside, a town just north of Miami. According to the New York Times, survivors of the collapse heard fire alarms, falling debris, and felt “the ground trembling” around 1:30 am on June 24, when the building began to collapse.

As of now, 10 people have been confirmed dead after being found in the rubble where the tower once stood. CNN reports that 151 people remain unaccounted for.

Samuelson’s grandparents have not yet been found. Mr. Notkin is 87 and Mrs. Notkin is 81. The couple lived in apartment 302 in Champlain Towers South.

The Daily Dot has reached out to Jake Samuelson.