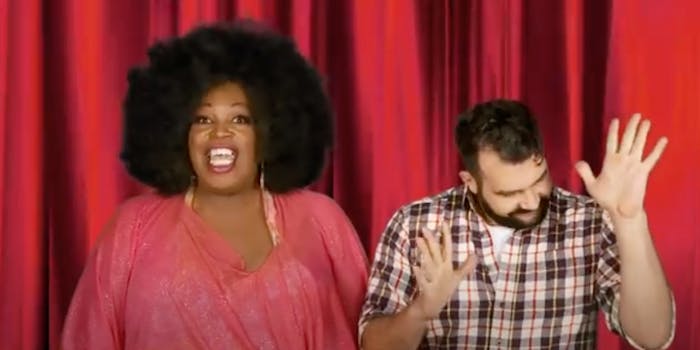 She was rushed to the hospital on July 19.

Drag performer Lady Red Couture, who starred in Hey Qween! on YouTube, died on Saturday. She was 43.

“I can’t believe I am writing this message but the unthinkable has happened,” he wrote. “This morning at 5am, I received a call from the hospital letting me know that Lady Red just passed away.”

Lady Red was rushed to the hospital on July 19 due to complications she experienced from her “chronicle condition -cyclic vomiting syndrome,” Heavy reports.

Her passing comes a day after McGovern wrote that Lady Red had stabilized. He said she was in the intensive care unit (ICU) but had tested negative for COVID-19.

On July 24, McGovern wrote: “All your prayers are working.” He said she’d been unconscious and on a breathing tube for five days before stabilizing. McGovern added that they had been hoping to move her out of the ICU over the weekend.

Jackée Harry—best known for her role on Sister, Sister—posted a tribute, along with a photo of the two of them together. “Some people have personalities too big for this world, so they’re called on to greatness,” she wrote. “Lady Red @Mothercouture was one of them. Rest in power, Queen.”