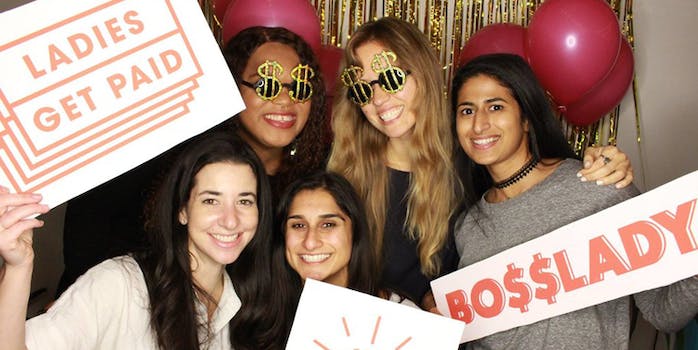 Ladies Get Paid isn't going to let MRAs deter them from destroying the wage gap.

As the premier get-together for the advertising industry, the annual Cannes Lion International Festival of Creativity hosts a lot of heavy-drinking old white guys—at least according to Claire Wasserman, formerly the marketing director for creative coordination service, Working Not Working. Wasserman attended in 2016, and tells the Daily Dot that she spent the bulk of her time there “being objectified.”

“I remember walking into this party the first night,” she recalls, “and this guy came up to me and said, ‘Hi, whose wife are you?’ And it was just startling. Like, oh, OK. And it was kind of like that the whole week.”

Wasserman went home and wrote an essay about the experience: the barrage of men who valued her not in a professional capacity, but as a potential sex partner; the assumption that she couldn’t possibly be there because she was good at her job, she definitely must be someone’s plus one. While writing, she fell into a familiar trap: How did I bring this behavior on myself?

“It was me trying to figure out: Did I play a role in this? Was I dressed inappropriately, was I too friendly?” she tells the Daily Dot. “And then, oh, my god, the exhaustion that we feel trying to navigate all this stuff. It isn’t just the work to get ahead, [we] also have to navigate these gender dynamics while we’re working to get ahead, and it is exhausting.”

Rather than publishing the essay, which she thought might hurt her professionally, she emailed it to a few friends, who sent it to their contacts, who forwarded it on. “People would start writing back with their own stories,” Wasserman says. “That was the genesis of Ladies Get Paid: Doing it in our inboxes, it was this private safe space and it was story-sharing.”

What is Ladies Get Paid?

Ladies Get Paid is a two-person startup, run by Wasserman and her partner, that organizes town halls, workshops, and other educational events for women-identifying and non-binary people. Intended to teach participants how to handle the most common barriers that stand in the way of professional advancement, Ladies Get Paid has grown to 20,000 members around the world after just 18 months of official existence.

But while the seed of feminist thought planted itself in Wasserman’s brain after Cannes, it didn’t germinate for over a year, time she spent reading up. Then, an art director friend of hers complained that she was getting paid less than her male counterparts, and didn’t know how to set an appropriate fee for her work. In August 2016, Wasserman held a town hall in a New York City apartment. Attended by 100 people, it explored money—an appropriate theme for a group that would later set its sights on fair payment.

As Wasserman explains, “Money is so much bigger than just money. It represents power and value and self-worth.”

And just as she expected, that initial conversation quickly galloped in a more global direction: “Were we being recognized and rewarded for our work? And if not, why, and if not, what could we do?”

“It was really awesome to see these women trade stories and strategize with each other and the honesty that they shared, it really was what I was looking for,” she remembers. “And I went home that night, and I had no intention of doing anything beyond that, but I created this Slack group,” referring to the workplace messaging system.

Wasserman created chat rooms in Slack for each of the salient topics that came up in the course of the town hall. She invited all the attendees to join, as well as the names from the event’s waitlist. “A few days later, it was like, ‘Ooooh there’s something here, people cannot stop talking about the challenges they’re experiencing at work and what they can do.’” About two weeks later, Wasserman resigned from WorkingNotWorking to focus on Ladies Get Paid full time. Since then, the CEO has seen 19 new chapters pop up and now tours the country, training members to teach her advancement curriculum.

How Ladies Get Paid works

Ladies Get Paid relies more on word of mouth than on pointed marketing efforts, although Wasserman says she did ask her friends with “big followings” to connect her with three other people who fit the organization’s goal: to build a network of “socially conscious, fabulous women.” It’s free to join—simply add your name to their newsletter mailing list, which comes with an invitation to join their very robust, roughly 10,000-person Slack. If you want to become an “ambassador” and open a local chapter that holds events, Wasserman explains, you have to wrangle at least three other women willing to sit on a committee with you.

Wasserman flies out to co-host the first town hall with newbies and mines Slack for theme ideas. She also looks out for topics that people “get up in arms about,” she says, and spins them into conversations, like how to leave your job, how to set boundaries, and how to cope with burnout.

With the theme settled, Wasserman and/or her ambassadors select five to seven women with pertinent stories to share. They sit in front in a sort of informal panel, and chairs are arranged in a semi-circle around them. Speakers share their stories, and a moderator picks people from the audience to share their relevant experiences throughout. Each contributor needs to end by explaining what they learned. Attendees are allotted 30 minutes before and after the town hall to network, and ambassadors split ticket sales—say, $15 per head for 150 people—among themselves, Ladies Get Paid, and their official speakers.

Initially, Wasserman made a “no men” rule because she wanted participants to feel comfortable speaking their minds, and she doubted they would if there were men present.

“I consider women at work being a marginalized group and at more of a disadvantage,” she explains. “Personally, I think it’s OK to give women advantages so that men and women can get to a more equitable place. If you’re bringing together a vulnerable group of people to talk about the issues of why they are vulnerable,” she continues, “then how could I let the very people in who made us marginalized and vulnerable?”

But the refusal to admit men ended up catching the attention of the last group Ladies Get Paid wanted to notice them: Men’s Rights Activists.

In October, two members of the National Coalition for Men served Ladies Get Paid, its ambassadors, and Wasserman herself. “I technically got sued 10 times,” she says. “They sued two of the events we hosted, one in L.A. and on in San Diego,” naming her personally.

What argument is there to be made against an organization that advocates for inclusion? “Reverse sexism,” according to MRAs, which is a brand of discrimination that does not actually exist but that California State law apparently recognizes as legitimate nonetheless.

One complainant argued that he showed up at a Los Angeles Ladies Get Paid event and was turned away (true, Wasserman says); the other said the same thing happened to him in San Diego (to the best of Wasserman’s knowledge, no one involved ever saw the guy in question on the premises). Both men cited California’s Unruh Civil Rights Act, which holds that no person may be discriminated against or denied services on the basis of their gender, among other things. One might think reasonable judicial interpretation would allow a group that’s historically been marginalized—women, plus racial and gender minorities—to pursue their own interests outside the involvement of the party that marginalized them, but luck has not run with women’s groups.

After Wasserman got served—immediately upon her return home from the New York City Women’s March in January—she spoke with a woman who saw her organization, similar to Ladies Get Paid, bankrupted by an NCM lawsuit. Sensing the odds would not be in her favor, Wasserman opened her events to men.

“I’m not trying to get sued again. It still definitely feels like women-only—you’ll come to an event with women only and there will be five guys in the room,” she says. Although she still fields MRA harassment, she’s “feeling really brave now,” she adds. “If they [MRAs] want to get loud, we’ve got 20,000 people, they’ll get loud too.”

Although the lawsuits proved a fiscal disaster for Wasserman, Ladies Get Paid will persevere and even grow its services. “The big focus for us is going to be creating a video library,” she says, describing a series of webinars that resemble author and executive Seth Godin’s “altMBA” online workshops. She envisions a series of internet classes taught by her growing team of career coaches (and Wasserman herself) that members could access whenever they have a free moment, rather than having to show up at an appointed time for a live webcast.

Despite the sexist legal pushback, Wasserman has no plans to pack it in. She has launched a crowdfunding effort to offset those legal costs and pay for the program’s growth. She says the point at which you feel like you might be penalized for speaking out is precisely the moment you need to shout the loudest.

“When you get together with a group of friends, a group of girlfriends and you’re talking about rising up at work,” she explains, “it’s much bigger than you. And if you’re nervous about advocating for yourself, remember that if you do it, you’re doing it for all of us.”

“When you look around in a room full of women,” she concludes, “you feel really good.”