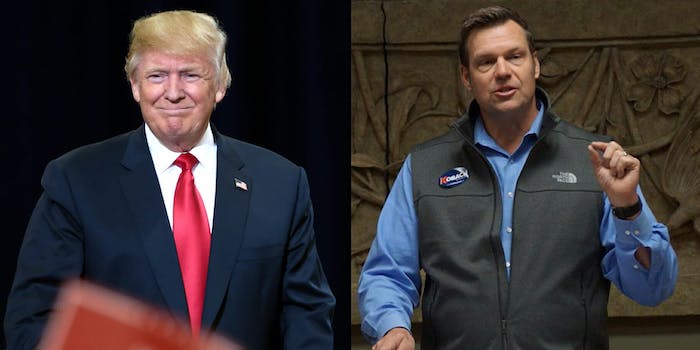 Kobach had 10 demands from the White House, according to a report.

Former Kansas Secretary of State Kris Kobach gave the White House a laundry list of demands he had if chosen to become President Donald Trump’s “immigration czar,” according to a new report.

The New York Times reports that Kobach, who served as the vice chairman of Trump’s “election integrity” commission several years ago, outlined 10 conditions he demanded if he were chosen for the position.

Those included: all-day access to a government jet, an office in the West Wing of the White House, guaranteed weekends off, to be the face of the administration’s immigration policy on television, and a promise that he would become Homeland Security secretary by the end of the year.

Kobach also reportedly wanted “walk in” privileges to the Oval Office and to have an “assistant to the president” title.

Last month, the Daily Beast reported that Kobach reached out to the White House to replace former Secretary of Homeland Security Kirstjen Nielsen.

Kobach did not return a request for comment about his demands when contacted by the Times. Trump is leaning toward appointing Kenneth T. Cuccinelli II to the “immigration czar” role, according to the report.