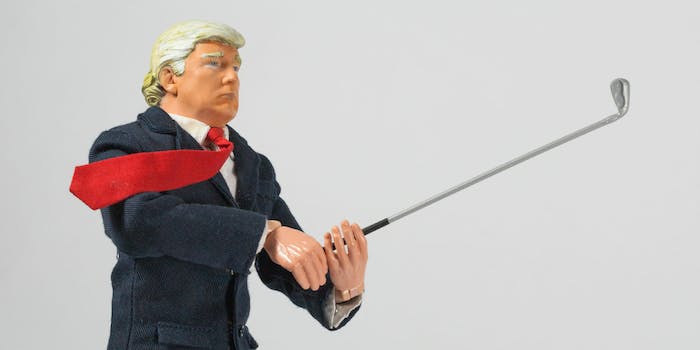 Trump posts a world-class golf score, and the internet laughs at him

Maybe, um, he should turn pro.

But even this story is over the top.

According to freelancer writer Leif Skodnick, Trump (or somebody associated with Trump) posted a score of 68 on the Golf Handicap Information Network database. It’s, um, not exactly in line with some of Trump’s most recent entries into the GHIN database, including a 96 in the only other score from his presidency and a number of scores where he reached into triple figures.

BREAKING: President Trump has posted an 18-hole golf score to @USGA Golf Handicap Information Network for first time this season – a 68(!) on a course with a 75.3 rating/139 slope. pic.twitter.com/yiHKdhIWU9

As Skodnick wrote in a tweet filled with sarcasm, “This might be the best round of golf by a head of state since Kim Jong Il’s 38-under par performance (with five aces!) at Pyongyang Golf Course.

Of course, it’s highly unlikely that Trump is a good enough golfer to put together a score like that (though Skodnick said he believes Trump and not anybody else was the one who actually inputted the score into the database).

As Golf.com explains, “Several oddities jump out on Trump’s handicap card, which is publicly available on GHIN.com. First of all, the 68 was the best round he has ever reported; in fact, it’s the only sub-70 round he’s ever reported. His next-best tally was a 70 from August 2013. On top of that, Trump has only reported two official scores since becoming president, despite having played more than 100 rounds since his inauguration. Golfers are technically supposed to post every round they play, though many neglect to do so.”

Twitter wasn’t all that impressed with Trump’s supposed score.

Though Trump constantly attacked Barack Obama for golfing when he was president, the Trump Golf Count tracker noted that Trump has hit the links 176 times since taking over for Obama. According to Trump’s most recent score, he’s apparently spent most of that time getting really, really, really good at golf.