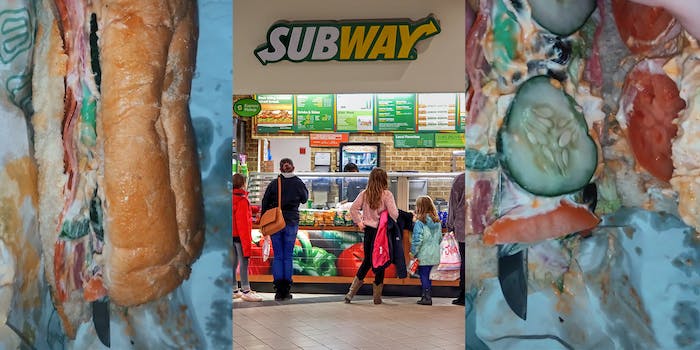 ‘I did actually harm myself’: Customer says she found knife in her Subway sandwich [UPDATED]

The customer says she has yet to receive a reply from the fast-food franchise.

A woman on TikTok says she accidentally harmed herself with a knife she found in her Subway sandwich.

User Kayla Caswell (@kaylacaswell5) shared a video of the sandwich on TikTok, where she pulled it apart to show the knife inside. The video, which received about 1.7 million views by Thursday, was captioned in all caps, “A KNIFE WAS LEFT IN MY SANDWICH.”

In the video, Caswell says the sandwich came from a Subway in Syracuse, New York. She says her sandwich was “a little bit different” than other Subway sandwiches and reveals the knife hidden squished between her toppings.

The TikToker says she contacted the restaurant, but they allegedly told her, “I don’t know what you would like us to do about that.” She says she also emailed Subway’s corporate office but hadn’t received a reply at the time she posted the video.

“I’m going to blow this up on TikTok until Subway gets back to me, or I guess the next step will be lawyers because I did actually harm myself,” she says in the video.

As of Thursday, the video’s comments had been turned off. The Daily Dot reached out to Subway via email.

“Subway and our network of franchisees take guest safety extremely seriously. We are working to get in touch with the guest, as we have not heard from her directly.”