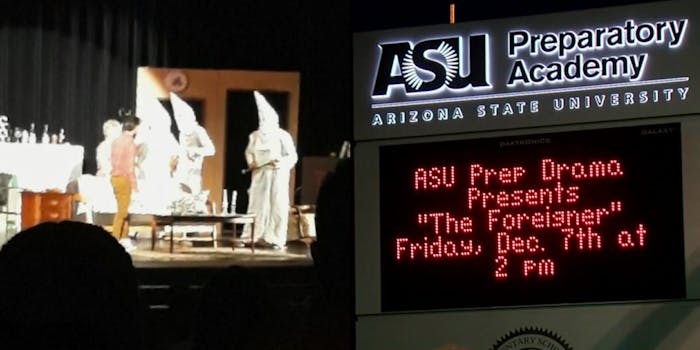 'The KKK walked into my kid's school Friday and I didn't get to stop it.'

Last Friday, the ASU Preparatory Academy’s drama class performed The Foreigner for the whole school. It’s a popular comedy written in the 1980s, and in a major plot point, the main character thwarts the malicious plans of a group of Klansmen. Parents say that the problem isn’t the Klansmen in the play, but that the kids were made to dress up in the full KKK costumes, including the white hoods.

“Three students dressed as the KKK walked down the middle of the assembly as part of a play,” said an anonymous parent to ABC 15. “We can talk about racial prejudice, we can talk about the insensitivity, but to have our children put on the robes and assume the characters, it’s wrong…There is no justification for it.”

Folks also were upset that no one was informed about the costumes ahead of time. “At least inform the parents, give us the ability to make that decision,” the anonymous parent said. “The KKK walked into my kid’s school Friday and I didn’t get to stop it.”

ABC 15 reports that 75 percent of the student body at ASU is Hispanic and 9 percent are Black.

In a statement, ASU Preparatory Academy acknowledged the performance and said that the students had picked the play themselves. It also noted that the KKK was not endorsed by the play, saying, “The play portrays an image of members of Klansmen in a brief scene toward the end in which they are made fun of and driven away.”

“We apologize if anyone was caught by surprise with the appearance of these characters,” the statement continued. “We are confident that a fair reading of the text of the play, and a fair interpretation of the intentions of students who performed it, reveals no endorsement of bigotry.”