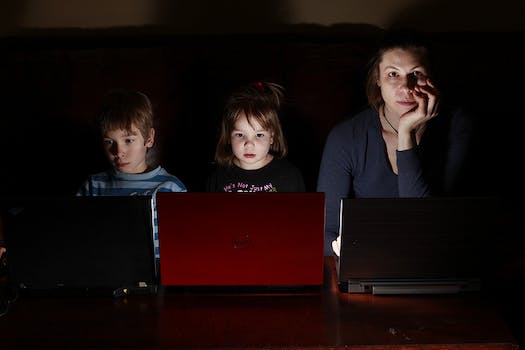 A new search engine for kids bans words like 'bisexual.' And that's a problem.

The endless abundance of information available on the Internet can be overwhelming—and even dangerous—for children. There are plenty of tools and strategies for keeping young people safe online, and the new search engine Kiddle, a “visual search engine for kids,” is the latest resource to court concerned families and schools. But could the search engine be causing more harm than good?

When the engine launched, users began to notice that terms like “lesbian,” “gay,” “bisexual,” “transgender,” “queer,” and “LGBT” produced no results.

Kiddle, though not owned by Google, is powered by Google Custom Search and utilizes Google’s SafeSearch filtering. SafeSearch is designed to block explicit photos and videos, like pornography. Kiddle has taken SafeSearch a step further, though, by blocking entire words.

“Transgender” is no longer blocked; in fact, it directs to educational resources such as the LGBT peer support network COLAGE, the PBS documentary Growing Up Trans, and an article about gender-neutral bathrooms in schools. But when a user searches for one of the other above terms, they receive a clear, yet unexpected, message. 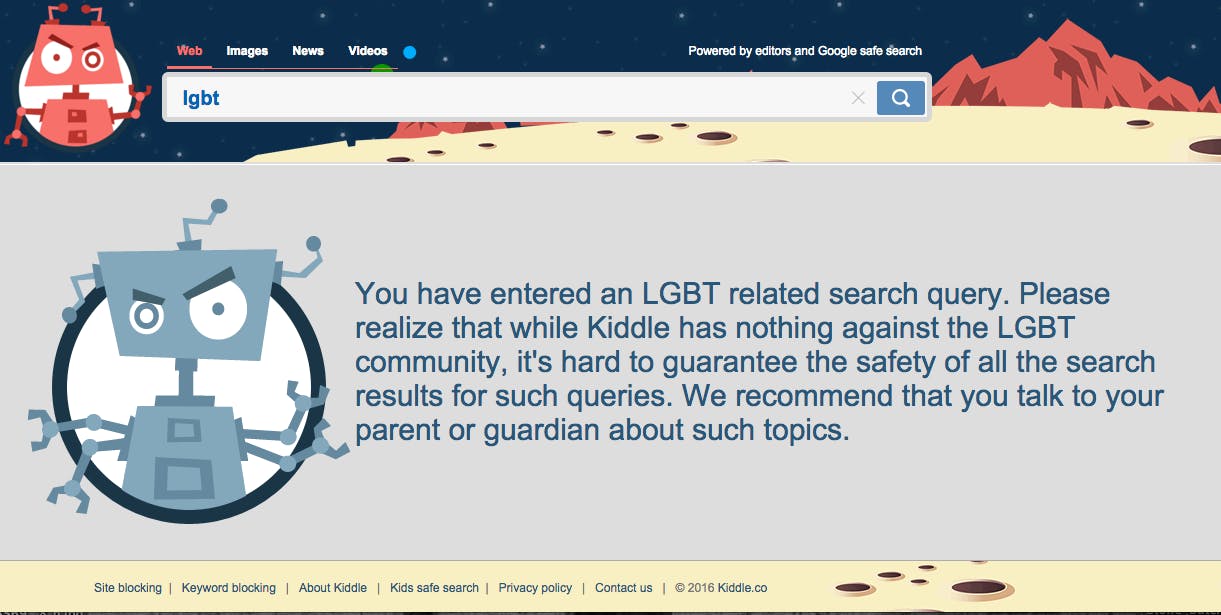 “You have entered an LGBT related search query,” the site reads. “Please realize that while Kiddle has nothing against the LGBT community, it’s hard to guarantee the safety of all the search results for such queries. We recommend that you talk to your parent or guardian about such topics.”

Kiddle applies the “LGBT related search query” designation inconsistently. For example, while a search for “gay marriage” produces the above message, a search for “marriage equality” leads to President Obama‘s statement following last June’s Supreme Court ruling. A search for “queer” offers no results, while a search for “genderqueer” provides links to a photo essay on PBS’s website and a glossary of terms prepared by the LGBT support organization Parents, Families and Friends of Lesbians and Gays (PFLAG). Access to resources, then, is entirely dependent on word choice, and while precision in language is a useful skill for children to learn, it may make finding LGBT resources overly complicated for Kiddle users.

Kiddle’s stance on “LGBT related search quer[ies]” is particularly concerning given how many LGBT young people seek resources and support online. In 2013, the Gay, Lesbian & Straight Education Network (GLSEN), a nonprofit committed to school safety for LGBT students, released “Out Online: The Experiences of Lesbian, Gay, Bisexual and Transgender Youth,” the first in-depth national report on LGBT youth and the Internet. The report found that 81 percent of LGBT youth have searched for health and medical information online, compared to 46 percent of non-LGBT youth.

Additionally, GLSEN found that LGBT youth are five times as likely as non-LGBT youth to search for information about sexuality or sexual attraction. It’s clear, then, that LGBT youth are using search engines to find resources, and safe search sites like Kiddle are making such resources more difficult to find.

“One of the things that concerns us about Kiddle is that there are certainly age-appropriate and developmentally appropriate ways to talk about sexual orientation,” Emily Greytak, Ph.D, GLSEN’s director of research, told the Daily Dot. “The idea that talking about LGBT people and communities is somehow so sensitive that it can’t be available to youth is one of the things that continues to stigmatize and marginalize LGBT people and prevent youth from learning about themselves and others.

“While it definitely seems that Kiddle’s intentions are not to be exclusionary, the reality is that the youth who use these sites are being sent a message that is potentially very problematic.”

As a parent herself, Dr. Greytak appreciates and understands the need for safe search resources. Her suggestion for compromise? Making computer time a family activity.

“One alternative is searching with your kids and using that as an opportunity for education and teachable moments,” she said. “Equipping them with media literacy and critical thinking about how you evaluate sites and what information you trust and what information is appropriate is always a good idea around any kind of media consumption.”

Kiddle did not respond to a request for comment.