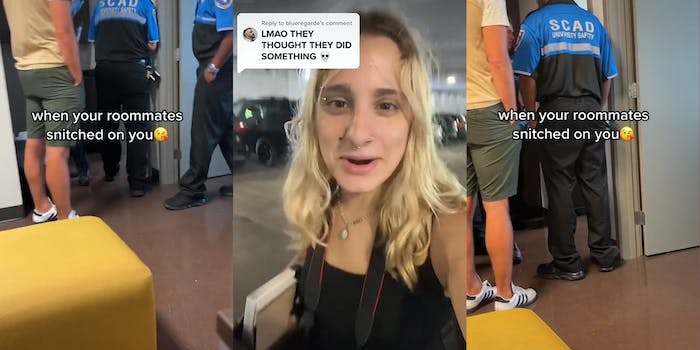 ‘This is my biggest fear’: College roommates ‘snitched’ on a TikToker. She got kicked out of her dorm for CBD oil

A TikToker says that her roommates “snitched” on her, leading to her being kicked out of her dorm at the Savannah College of Art and Design when the university’s safety team found reportedly found CBD oil in her room.

In the video posted by TikToker Sarah (@sarahass111) on July 28, she shows a clip of SCAD university safety staff entering her bedroom. Text overlay reads, “when your roommates snitched on you.”

In the caption, she says, “all they found was my CBD oil,” implying that her roommates may have reported her for using other marijuana products. CBD is a non-psychoactive cannabis derived chemical with numerous health benefits.

The video has reached over 1.4 million views as of Tuesday. In a video response to a comment, Sarah says she was “kicked out” but has not posted a storytime.

In the comments, users share their own stories of their college roommates “snitching” on them for using marijuana, putting Sarah’s former roommates on blast for reporting her to the university’s security team.

“My old roommate called the cops on me cause I came to our room smellin like [weed], didnt even smoke in the room,” one user said.

“I go to scad and got kicked off campus for it,” another shared.

“Happened to me too but my RA told me and gave me the time to hurry and put everything in my car LOL,” a third added.

Other commenters criticized the art school’s dry-campus policy, which prohibits students from using drugs or alcohol on campus.

“HOW YOU GONNA GET MAD FOR SOMEONE SMOKING AT AN ARTS SCHOOL,” another said.

The Daily Dot reached out to Sarah via TikTok comment.