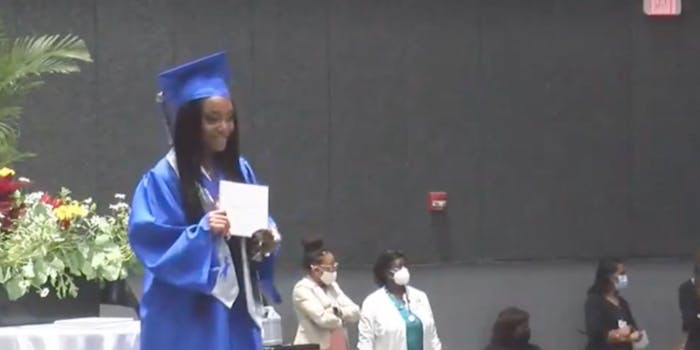 A video of a Jackson, Mississippi student graduating has gained attention after she was shot and killed at a Texaco gas station Tuesday night.

The Independent reports that on June 1, 18-year-old Kennedy Hobbs was shot and killed when she stopped at a gas station on her way to a graduation party. Jackson Police have not released details regarding whether Hobbs knew her killer or what specific circumstances led to her death.

According to the Associated Press, Hobbs is the child of a member of Jackson Public Schools faculty, and her death has cast a shadow over the commencement ceremonies planned for the district’s seven high schools.

Jackson had a record year for homicides in 2020: The state capital saw 130 homicides, and the Grio reports that most of these deaths were people in their 20s, with one in 10 being a teenager.

Hobbs’ boyfriend was also reportedly killed at a convenience store two months prior, according to the Grio. Jackson Police have not indicated whether these incidents are related.

Hobbs had started her own business, according to the Clarion Ledger. She owned Kaays Waxing bar, a studio which provided waxing services.

At an impromptu press conference held at the Jackson Police Department Wednesday, local radio personality and close friend of the family Napoleon Edwards spoke, along with many other speakers, about the situation in Jackson.

The Daily Dot has reached out for information regarding updates from the Jackson Police Department.