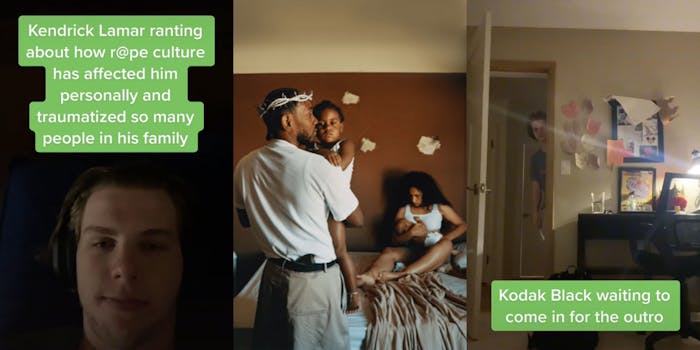 The album, “Mr. Morale & The Big Steppers,” was released May 13, and featured Black several times, despite his sexual assault allegations.

In November of 2016, Black was accused of allegedly raping a teenage girl in a South Carolina hotel room, according to AP. Black was originally charged with rape, but accepted a deal and pleaded guilty to first-degree assault. He was sentenced to 18 months probation.

According to a TikToker Evan Dondlinger (@evan.dond), in light of the allegations, Black was an inappropriate addition to Lamar’s new album.

Dondlinger shared a TikTok calling Lamar out for “ranting” about how rape culture has personally affected him and traumatized many of his family members — but then featuring Black.

“Such an odd choice, like literally anyone else?? Especially for THIS album?” Dondlinger wrote in the video’s caption.

@evan.dond Such an odd choice, like literally anyone else?? Especially for THIS album? #kendrick ♬ oh gee oh boy

Despite Dondlinger’s adamant critique of the feature, viewers were divided on the situation.

“LITERALLY,” one viewer commented on the video supporting Dondlinger’s criticism.

“RIGHT,” another viewer commented in all caps.

A third viewer wrote, “THANK YOU LIKE OF ALL PEOPLE.”

Some viewers say Lamar made the controversial choice intentionally.

“kodak was charged w sexual assault and also experienced it as a child. kendrick wanted to show how sa can effect a person from all angles,” one TikTok user said.

“Kodak was kinda perfect in the album for it theme. He talk of how your environment created people and develop a sense of self from your trauma,” another user wrote.

Someone else simply said, “That’s the point.”

One viewer speculated that “Mr. Morale & The Big Steppers” could remain Lamar’s most controversial album because of Black’s features.

“this album i can already tell is gonna be the one in kendricks discography that will continue to like have the fanbase split on their thoughts of it,” the viewer commented.

The Daily Dot reached out to @evan.dond via TikTok comment.