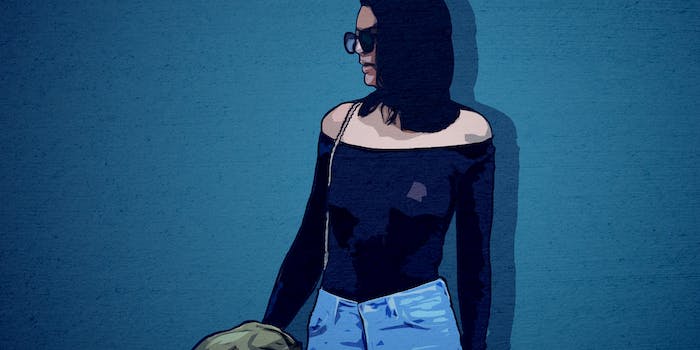 The “Free The Nipple” campaign has existed in various forms since 2014, aimed at fighting indecent exposure laws and online censorship that keep women from showing their nipples the way men can. And now, Kendall Jenner has joined the cause.

In a post on her app, Jenner addresses images of her wearing a sheer top, where her nipples are clearly visible. “I really don’t see what the big deal is with going braless!” she wrote. “I think it’s cool and I really just don’t care! It’s sexy, it’s comfortable, and I’m cool with my breasts. That’s it!” For the record, this isn’t the first time Jenner has posted a nip pic.

my favorite photo for all 40 mill of you. genuine happiness…taken by lil Ky @490tx

Platforms like Facebook and Instagram prohibit “graphic content” on their sites, and both often consider photos of breasts to fall into that category, whether it’s a photo of a woman breastfeeding or one simply topless. However, many point out that nipple-baring photos of men seem to be no problem on these platforms, and that the line between decent and indecent is confusing and sexist.

For instance, on a recent episode of the TV show Botched, a woman who had a double mastectomy had a “nipple banking” procedure, in which doctors temporarily moved her nipples to her abdomen until they could repair her implants. Her nipples were blurred when they were on her breasts, but not when they were on her abdomen. Later, she had her nipples replaced with tattoos of nipples, which were also blurred. Because the world can’t handle such scandalous tattoos. 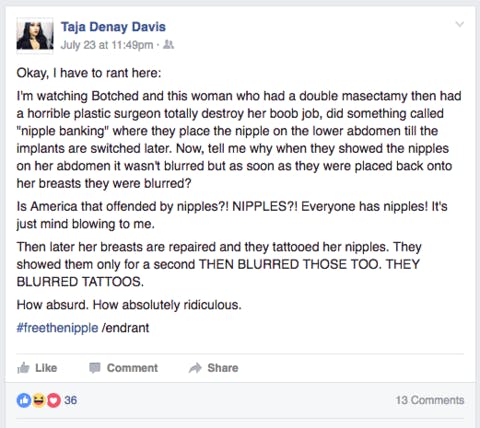 Most of the time, the only difference between a male nipple and a female nipple is some extra fatty tissue and the ability of one to secrete milk. Besides, it’s July. It’s hot out. Let everyone cool their nips.