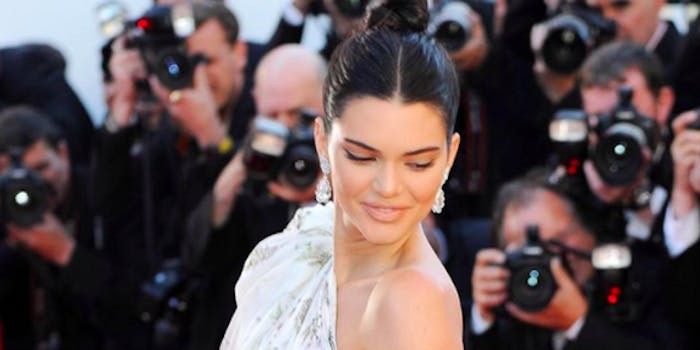 The new deal seems safer than her ill-fated Pepsi collaboration in April.

Kendall Jenner revealed via Instagram on Wednesday that she’s joining the Adidas family as a brand ambassador.

The model and TV personality racked up more than 5 million views on a Boomerang she posted of herself donning an Adidas tracksuit and Gazelle sneakers, sitting behind the wheel of a golf cart in front of an Adidas mural that reads “Welcome to the Family.”

“A longtime fan of the brand, Kendall embodies the spirit of Adidas Originals as a creative force shaping the world today by challenging the status quo in her own way,” the company said in a press release. “A classic icon, Kendall is a true Original and we welcome her to the family.”

The ambassador position is Jenner’s first new deal since her widely criticized Pepsi ad in April (well, unless you count Fyre Festival). She now joins the ranks of Pharrell, Karlie Kloss, Hannah Bronfman, and Kate Moss, all of whom have repped the brand at various points, according to the Hollywood Reporter. Kloss celebrated the occasion by posting a selfie of her and Jenner to Instagram with the caption, “Welcome to the fam, @kendalljenner!”

It also puts Jenner in the company of brother-in-law Kanye West, who last year inked a long-term deal with Adidas to usher his Yeezy line into the world of sports performance products. Jenner’s younger sister, Kylie, revealed a deal with Puma, a direct Adidas competitor, last year—probably a sore subject during the holidays.